With Yemen attack, IS aims to eclipse Qaeda: Analysts 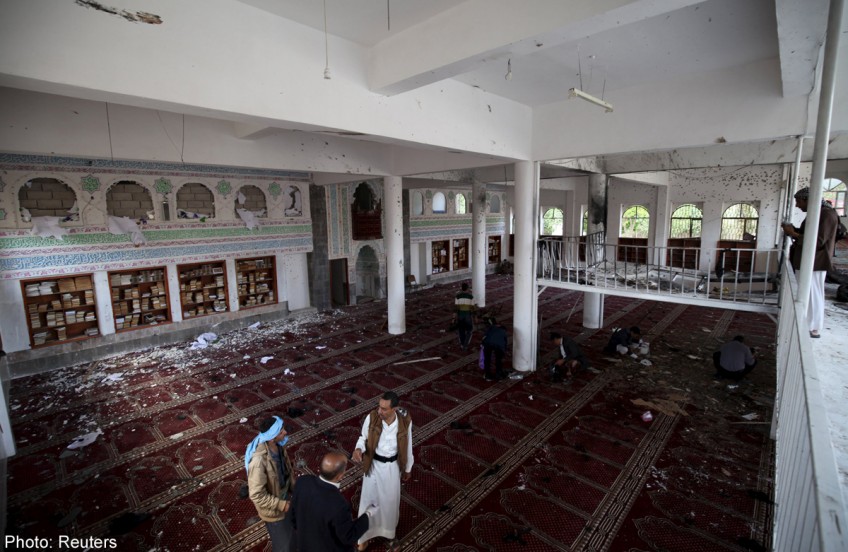 DUBAI - By claiming its first attack in Yemen the Islamic State group is seeking to exploit the chaos gripping the country and siphon support from the world's most fearsome Al-Qaeda branch, analysts say.

Suicide bombings at two mosques frequented by members of the Shiite Huthi militia in control of the capital killed 142 people and wounded 351 on Friday in one of the deadliest extremist attacks in Yemen's history.

IS claimed responsibility, warning it was "the tip of the iceberg" for Yemen.

In contrast, the country's Al-Qaeda branch, AQAP, issued a statement saying that it avoided "targeting mosques and markets" to protect "innocent Muslims".

The carnage in Sanaa came 48 hours after IS claimed responsibility for an attack on foreign tourists at the National Bardo Museum in Tunis, in which 21 people died.

Experts said the extremist group may have been trying to give the impression that it could launch a coordinated, region-wide campaign of attacks.

IS "demonstrated in recent weeks its ability to coordinate a vast expansion movement, first in Libya, then Tunisia, and finally Yemen," said Jean-Pierre Filiu, professor at the Sciences-Po institute in Paris.

He said the attacks suggested IS "wants to show would-be jihadists its ability to strike the enemy... more violently than AQAP could".

"Already, whole sections of AQAP are leaning towards Daesh," he added, using the Arabic acronym for IS.

Yemen has descended into chaos since the 2012 ouster of longtime strongman Ali Abdullah Saleh, and security has broken down since Huthi militiamen swept unopposed into the capital last year.

The Huthis, allegedly supported by Saleh as well as Iran, surrounded the presidential palace in Sanaa, forcing President Abedrabbo Mansour Hadi to flee to the south in what Yemen's Gulf neighbours labelled an attempted coup.

The militia has met fierce resistance from AQAP and Sunni tribal fighters after trying to push further into central Yemen, and clashes have left scores dead.

AQAP, considered by the United States to be the jihadist network's most dangerous franchise, was formed in 2009 and has been responsible for a string of devastating attacks on Yemeni security forces in recent years.

It claimed responsibility for the bloody January 7 attack in Paris on French satirical magazine Charlie Hebdo, targeted for its cartoons of the Prophet Mohammed.

But analysts say AQAP's potency in Yemen may have diminished since the country's descent into disarray.

IS, by comparison, has expanded rapidly after seizing parts of Iraq and Syria last year, receiving pledges of fealty from jihadist groups in Egypt and Libya, and now, allegedly, offshoots in Tunisia and Yemen.

In spite of the severe rift that has formed between IS and Al-Qaeda's Syria branch Al-Nusra Front, AQAP last year called on Muslims to support IS in order to face down "crusaders" in the Middle East, seen at the time as a sign of deference from the Yemeni organisation.

AQAP has also been hit by defections. Its fighters from Dhamar and Sanaa provinces claimed allegiance to IS last month with the stated intention of attacking Huthis who, as Shiites, are viewed by the group as heretics.

"Since the Huthi militiamen took control of the capital and a good part of the country, Al-Qaeda lost credibility, having been unable to defend even Sunni provinces," said Mathieu Guidere, an expert in Islam at the University of Toulouse.

IS meanwhile "has never hidden its desire to expand into (the Arabian Peninsula), and Yemen is a prime target as it is seen as the birthplace of the Arabs," he added.

In addition, the group could be seeking what Guidere termed "the strategic encirclement of Saudi Arabia," after having seized much of Iraq's Sunni Arab heartland, including Anbar Province, which borders the kingdom to the north.

Filiu warned that IS attacks in Yemen and Tunisia in the space of a few days could be just the beginning of the group's next phase.

"My hunch is that this movement (into the two countries), marked by a significant acceleration, is the precursor to the resumption of a terror campaign in Europe," he said.