Yoga with goats craze takes off in US 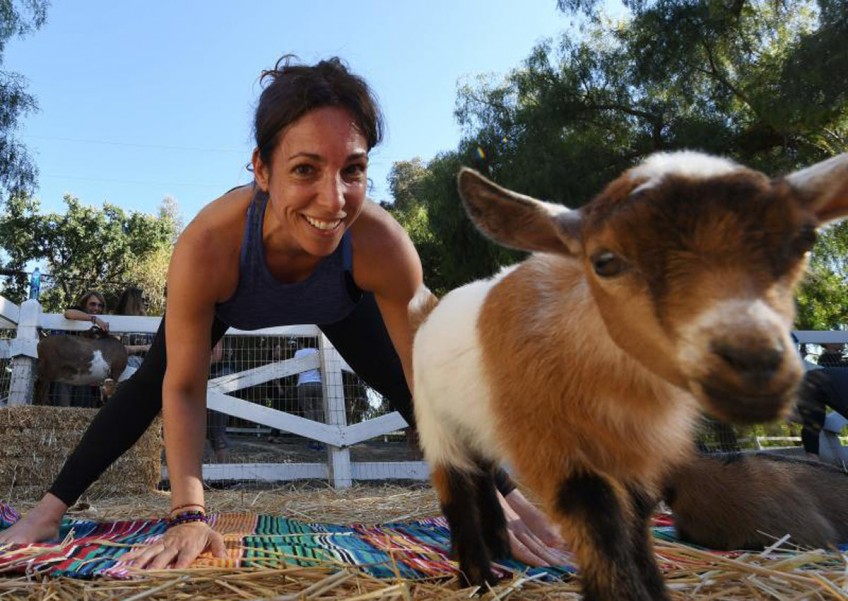 LOS ANGELES - Adonna Ebrahimi is stretched out on her yoga mat, struggling to maintain a cobra pose - and her composure - as a couple of baby goats do a balancing act on her back.

Welcome to "Goat Yoga," the latest fitness craze sweeping the United States, where young and old are lining up for the popular classes that leave participants not only saying "namaste" but also in stitches.

"At first, it was a bit scary because I didn't know the goats were going to jump on my back," Ebrahimi, 53, said on a recent afternoon after completing her first "Goat Yoga" class outside Los Angeles.

"But then they were there and you felt the warmth of the animal and you're on the straw, in the sun, with the trees and the blue skies around you, and it just felt so calming and peaceful." Some 20 people and 15 goats - 11 kids and four moms - took part in the class that was organised outdoors in a pen covered with straw.

As yoga instructor Meridith Lana encouraged participants to "exhale," "pull your navel to your spine" or "watch your posture," the sound of bleating reverberated in the background, the nimble animals skipping about, jumping on people's backs, munching on their hair or a beard and licking their faces.

A few also answered the call of nature.

"They're adorable and they're friendly," said Lana after the class. "They do eat your hair, they do leave you presents on your mat but it's all in fun.

"The therapy you get here is priceless." Danette McReynolds, whose family owns the goats, said she decided to host the classes to raise money for her 16-year-old daughter and a friend who are planning to showcase the animals at a farm show in Wisconsin this summer.

"We didn't know how it was going to go but it's taken off, we're booked solid," she said.

"People love it. They decompress, they cuddle the goats and relax." Lana said interacting with the goats is an experience similar to playing with a pet, which has clinically been proven to relieve stress and improve well-being.

"The happiness the goats bring is great," she said. "All animals are therapeutic but there is something about these goats that is just incredible.

"You can be in a child's pose position and the next thing you know, you don't want to get up because there is a goat on your back.

"If there's anything these goats allow you to be it's conscious." Several of her students said while the goats did admittedly get in the way of the yoga stretches and poses, they were a welcome distraction that had everyone giggling and vowing to come back for more.

"You can't really be upset when you're around a bunch of baby goats climbing around and being silly." There was also one added bonus, she said.

"I didn't think about the administration in Washington once during this entire hour," Waters chuckled. "I would love to do this every week if I could."