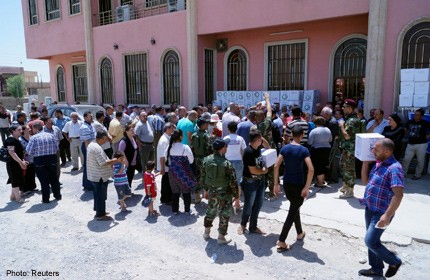 Displaced Christians wait for humanitarian aid at a church in Hamdaniya town, east of Mosul, northwest of Baghdad, July 20, 2014. The head of Iraq's largest church said on July 20 that Islamic State militants who drove Christians out of Mosul were worse than Mongol leader Genghis Khan and his grandson Hulagu who ransacked medieval Baghdad.

DUBAI - In hiding, targeted by drone strikes and unable to land a blow in the West, al Qaeda's ageing leaders are losing a power struggle with ultra-radical young militants in Iraq and Syria who see themselves as the true successors to Osama bin Laden.

The shadowy network that targeted the West and its Arab allies for almost a generation is increasingly seen as stale, tired and ineffectual on the hardcore jihadi social media forums and Twitter accounts that incubate potential militant recruits.

Western officials insist the network is still a top threat, in part because turmoil in Arab states gives it scope to organise: Its affiliates in Syria and Yemen include experienced guerrillas and expert bomb makers.

But many young Islamists who were of school age at the time of the Sept. 11 2001 attacks on the United States now look for inspiration not to al Qaeda, whose leader, Ayman al-Zawahri, is in his mid-60s, but to a Sunni Muslim group styling itself a caliphate.

Supporters of the so-called Islamic State admire its sectarian attacks on Shi'ites in Iraq and government forces in Syria, confident such violence is part of a broader war with the West advocated by bin Laden, killed by US troops in 2011.

The generational divide opening up in radical Islamist ranks threatens to topple al Qaeda from its primacy in trans national militancy, a stunning loss of prestige for a group whose hijacked plane attacks killed nearly 3,000 people in New York's World Trade Center, Washington and Pennsylvania.

The Islamic State, known as the Islamic State of Iraq and the Levant (ISIL) until the June 29 declaration of the caliphate, has galvanized young followers by carving out swathes of territory in Iraq in a rapid advance last month.

US intelligence agencies estimate around 7,000 of the 23,000 violent extremists operating in neighbouring Syria are foreign fighters, mostly from Europe. Diplomats in the region say many of these foreigners are fighting for the Islamic State, which also deploys them Iraq.

The group, whose leader Abu Bakr al-Baghdadi calls himself a "Caliph" or head of state, fell out with al Qaeda in 2013 over its expansion into Syria, where his followers have carried out beheadings, crucifixions, and mass executions.

Saudi dissident Saad al-Faqih told Reuters that the declaration of a caliphate was not as important for the militants' prestige as the lightening military advance that preceded it, beginning with the capture of Mosul on June 10.

"The declaration is a very loud noise, but not as effective as the success in conquering vast areas of Iraq," he said.

"That conquest has had a huge psychological effect in the whole region," the exiled dissident said.

No al Qaeda affiliate has officially endorsed the Islamic State, and scholars sympathetic to al Qaeda have denounced it, pointing to what they see as ISIL's willingness to use violence in turf disputes with al Qaeda's affiliate in Syria.

But their disapproval is cold comfort for al Qaeda. The caliphate, analysts say, was declared with potential recruits in mind, not to win kudos from leading scholars.

For many, ISIL's creation of a jihadi bastion spanning western Iraq and eastern Syria, and the slick online presence that publicizes it, compare favourably with al Qaeda's failure for almost a decade to land a big attack in the West.

The contrast is not lost on Islamists such as Abdul Majeed al-Heetari, a Yemeni cleric who reproached al Qaeda in a message on his Twitter and Facebook pages on July 15.

Noting al-Qaeda leaders were in hiding in Asia, he asked: "Who is worthier and stronger in the Shariah (Islamic law) and worthy of obedience: a secret organisation whose people and leadership are on the run, or a clear regime and a state that is empowered on the ground with people and reasons?"

Raising the rhetorical temperature, he said al Qaeda sought an Islamic State in a "fantasy world", even as its leaders languished in "deserts, wastelands, mountaintops, and valleys".

The Afghan Taliban, which gave bin Laden sanctuary in the 1990s, posted a message urging Muslims to avoid extremism and remain united, a message apparently aimed at the Islamic State.

Privately, some Taliban commanders told Reuters they did not want to anger al Qaeda, who they considered a long-time ally in the fight against NATO troops in the region. [ID: nL4N0PM23D]

But some Taliban commanders were enthusiastic about ISIL. One militant in his thirties said "dozens of my colleagues from here are with them."

The buzz around the Islamic State is reflected not only by the flood of recruits it has attracted in Syria and Iraq.

It is also seen in a propaganda war waged online by scholars supporting and opposing the Islamic State.

Cole Bunzel, a doctoral student at Princeton University, wrote that Islamic State's most effective voice was a Bahraini cleric, Turki al-Bin'ali, who he said was just 29 years old.

He "represents the assured spirit of a younger generation of jihadis ready and willing to break with an established cadre of jihadi intellectuals and carve their own path."

When the two men fell out over Maqdisi's denunciation of the Islamic state, Maqdisi suggested young ultra-radical scholars like Bin'Ali were disrespecting their elders.

"Take heed of seniority," Maqdisi warned the young preachers, accusing them of "wanting to stand upon the shoulders of our best and brightest and then discredit their intellects."

Earlier Bin'ali had attributed another elderly militant's criticism of the Islamic State to "confusion" likely caused by age.

Some counter-terrorism officials worry that al Qaeda's affiliates may redouble efforts to stage a spectacular attack in the West to try to salvage their reputation.

But in the meantime, its propaganda efforts seem lackluster.

Al Qaeda long ago disowned al-Baghdadi, but its leader Zawahri has not commented on the new caliphate, instead posting nostalgic videos memorializing bin Laden.

Some Islamists are not impressed.

"The silence of the ... leaders and their branches on the announcement of a new caliphate is not wise," said London-based Egyptian Islamic scholar Hani al-Sibai.

"Hinting and insinuation will not be of use ... There needs to be a clear, comprehensive and prohibitive statement."