Some people have proven that they will do just about anything for 15 seconds of online fame.

On Wednesday (Dec 7), a 22-year-old YouTuber in England had to be rescued after getting his head stuck in a microwave oven.

The man's friends had poured Polyfilla - a type of plaster used for minor building repairs - around his head which was placed inside the appliance.

Things started to go wrong when the substance rapidly hardened.

For over an hour, his friends struggled to free him from the microwave "mould" while he breathed using an air tube that was fed to him.

After their attempts failed, they called rescue services for help.

We're seriously unimpressed 😡. Five of our firefighters were tied up for an hour this afternoon, freeing a YouTube...

When five firefighters from the West Midlands fire service arrived at the scene, they were unimpressed by what they saw.

It was a prank that could have easily suffocated or injured the young man, said Shaun Dakin, the officer in charge of the rescue crew.

Taking apart the microwave oven was tricky as most parts of the appliance were welded together.

The firefighters consulted their technical rescue colleagues who guided them to carefully remove the Polyfilla around the young man's head using a screwdriver. 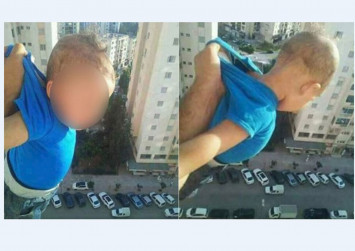 It took them nearly an hour to free him.

And even though the group apologised, the fire service said that it was a call that "might have prevented them from helping others in genuine, accidental need."

The YouTuber is lucky to have escaped unscathed this time, but he'd better think twice before attempting such stunts again.