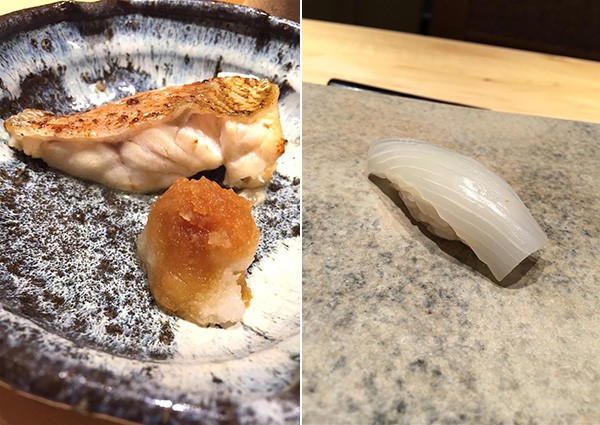 Takashi Saito used to run one of Tokyo's tiniest sushi bars. It could seat only eight people and was hidden inside a car park.

Despite its modest location - and absence of any signboard - sushi lovers from all over the globe beat a path to Saito-san's door in Akasaka, in Roppongi.

Sushi Saito is one of three sushi bars with three stars in the 2016 Michelin Guide Tokyo; the other two are Sushi Yoshitake and Sukiyabashi Jiro (of the 2011 movie Jiro Dreams Of Sushi fame).

But some say Sushi Saito is the world's best sushi bar - especially if you go by the ranking of Tabelog.com, the well-respected, user-generated Japanese restaurant guide that locals go by. Sushi Saito was given the highest ranking of 4.54 recently.

If you are a chef, perhaps you value peer review more. One can count no greater peer than the great French chef Joel Robuchon who has said of Sushi Saito, "The best sushi restaurant in the world".

One of the faithful legions who believes Saito is unique is Malaysian Carmen Chua who returns repeatedly to Sushi Saito, who has since February 2014 moved to bigger premises in Ark Hills South Tower - on the first floor, not the car park - not too far from its old home.

"I visit Tokyo a few times a year and always make sure I have a booking there during each visit," says the CEO of One IFC Sdn Bhd whose favourite food is sushi.

"What makes Saito-san so different are his skills and dedication to quality and freshness. What's amazing is his skills at pressing the rice. Very few in the world can do it the way he does it.

"Saito gets the pressure just right when he presses the sushi rice; the result is as if there is air in the rice. When you put it in your mouth, the rice completely melts away"

So enamoured is she of Saito's sushi, she is bringing it to Malaysia. Her company One IFC is the developer of the new six-star St Regis Kuala Lumpur in Sentral and when it opens on April 1 this year, Taka by Sushi Saito will open on level 3A.

Taka will be Malaysia's first restaurant by a three Michelin-starred chef and the first three-starred sushi restaurant to open outside of Tokyo.

It's considered a huge culinary coup to have succeeded in getting Saito to agree to open in Kuala Lumpur as he has been approached by investors from Taiwan, Hong Kong and Singapore.

Saito looks for more than an attractive business proposition: doing business is also about trust, building relationships and sharing a sense of connectedness based on common ground or like-mindedness.

"Carmen and I share the same passion and dedication to sushi and good quality food. She understands the art of sushi-making and that is very important for me," says Saito when he popped into Kuala Lumpur on a day trip to meet the media recently.

Chua's patronage of Sushi Saito over the last few years has clearly paid off today. The waiting list for a seat at Sushi Saito is now six months, and news of the KL opening has spread.

"On some days, we receive four to five calls asking when the KL outlet is going to open," Saito's interpreter tells us.

Saito has a global following and many of them are hoping that it would be easier to secure a seat in KL, a city where a waiting list at restaurants is unheard of. At many restaurants, including the most prestigious, on most days, you can simply turn up without a reservation and chances of getting a table is quite good. But then again, most restaurants have more seats than Sushi Saito.

The simple math is that limited seats will keep demand high but that is not the reason why the best sushi bars are small and intimate. There is a good reason for the number: "The principle of one sushi chef to eight guests allows for the perfect serving, rhythm and speed for the entire experience," says Chua.

For that reason Saito would not be opening more restaurants in Japan. When asked the question he laughs out loud - the kind of laugh that suggests it would require him to grow another pair of hands. "Oh, no, no!" Saito says in mock horror.

"He prefers to serve his loyal guests who have followed him over the years personally," explains Chua. "His commitment is to maintain his standards and he is highly respected for that."

There is also a lesson to be learnt from Tokyo restaurants such as Kanesaka who lost a star after expanding. And for that reason, too, there is no intention to have more than one restaurant in Malaysia.

For Taka by Sushi Saito, the chef will be providing three Japanese chefs he has personally trained and he will visit four times a year.

Everyone can learn how to make a proper sushi but making exceptional sushi is an art.

"Saito first satisfied himself that the chefs he hand-picked had what it took before starting to train them in the finer points of sushi-making. Masashi Kubota, for instance, has been with Saito for two years and has now achieved a level of sushi-making that Saito is satisfied with," says Chua. It's about getting the feel in the hands that comes with years of training.

In one sense, there is no recipe for making exceptional sushi; it's an organic process, an instinct you learn and develop.

Perhaps it is something wired in the palms: "If you look at Saito's hands, you will see that they are bright red - that's how warm his hands are. A man's palm is 5 deg C to 10 deg C warmer than a woman's and that is why they make better sushi chefs. You hardly ever see a woman making sushi at the professional level," Chua says.

"Cold fish has no taste," Saito's interpreter adds, explaining that the warmth of the palm brings the fish to the ideal temperature and taste for serving.

Saito is religious about sourcing. It is a task that he sees to personally, every working day. His day starts early when he makes his way to the Tsukiji fish market - a few kilometres away from his restaurant - to make his selection of the freshest fish and seafood, which would determine what he would serve that day. Whatever he is serving in Tokyo will be served in Kuala Lumpur.

The ingredients will be flown in three times a week.

"We will be arranging our own logistics for this," informs Chua. "This is an interesting key point that we do to guarantee that the quality and freshness are the same as in Saito-san's restaurant in Tokyo.

"For Saito, KL must be as good as Tokyo. He is very particular about that," she says.

Like the new Sushi Saito in Tokyo, Taka by Sushi Saito will have two sushi counters with seats for eight diners each, making a total of 16.

As part of a larger restaurant, there will be two additional private rooms - Taka shares space with a 12-seater tempura counter by Ginza Tenkuni, but that is a story for another day.

Taka will replicate the look and feel of Sushi Saito. Hinoki wood, a Japanese cypress, will be used for the counters. The use of wood, especially hinoki, is inseparable from Japanese culture and the best restaurants will use hinoki which is said to have antimicrobial properties and gives off a relaxing scent, adding to the comfort factor.

Taka's counters will be fashioned from rare 300-year-old hinoki wood that is estimated to have cost the company half a million ringgit.

The tableware is also specially sourced from Japan to chef Saito's aesthetic sensibilities.

Taka will offer omakase menus only, which means there is no a la carte and you are served whatever the chef wishes to make - which usually means the best he can make that day. Masashi Kubota and Makoto Maruyama are the omakase chefs.

Sushi Saito is one of the few sushi bars in Tokyo that also offers wines apart from traditional Japanese sake and shochu, so that can be expected at Taka.

Expect, also, to pay around RM1,000 (S$340) per head for a lunch or dinner experience although Sushi Saito is known for serving one of the best three-Michelin-star lunch deals in Tokyo.

He makes Edo-style sushi and his signature style is a preference for a smaller cut of fish, a touch more sea salt and the use of milder red vinegar in his rice.

Saito is especially proud of his tuna sushi and is also well-known for abalone, octopus, eel and purple sea urchin.

And according to a press release, the ingredient is completely wrapped around the rice so that the fish fills the mouth. Even the time at which the fish is cut is planned carefully so that the sushi is served at the perfect temperature to provide the ideal combination of texture and taste.

Secrets abound in the sushi kitchen: the rice is a special mix, so too what goes into balancing the taste of the vinegar, and the final sweet soy sauce (nikiri) that is brushed over the sushi.

Saito's sushi is enjoyed as is - whatever flavour needed to enjoy the sushi at its optimum, like fresh-grated wasabi and soy sauce, has been applied before he hands it to you.

His famous tamago (sweet layered egg) is always served at the end of the meal. As in other cuisines, a chef's skill with preparing egg dishes is adjudged to be the true test of a chef and it is said that the tamago here is beyond any reproach.

So tamago, anago (sea eel), akami (tuna, of various cuts), awabi (abalone) and tako (octopus) are all his signature dishes.

Is there constant stress to maintain those three Michelin stars? The affable and cheerful Saito-san laughs and says: "Oh, no, no. No stress."

Chua explains: "He is there at that level. Consistency has always been his strong suit. Anyway, sushi itself is a constant; you don't change the sushi all the time; sushi is very traditional. The whole point is authenticity. In Japan, they are very specialised - you are either a sushi restaurant or a beef restaurant."

And you keep at doing that one thing very well until it is second nature. And second to none.