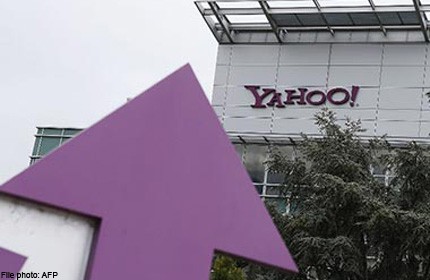 Yahoo shares powered higher Thursday after a survey showed the struggling Internet giant topped a survey for US Web visitors for the first time since 2011.

The comScore survey showed Yahoo edged past Google with 195.6 million unique US Web visitors. It was the first time Yahoo was on top since May 2011. The figures exclude Yahoo's newly acquired Tumblr blog sites.

The report provides a modest victory for Yahoo chief executive Marissa Mayer, who moved from Google a year ago. But Yahoo still trails Google in revenues and advertising, particularly in the key search segment.

A comScore survey earlier this month on search engines showed Google on top with a commanding 67 per cent market share, followed by Microsoft with 17.9 per cent, and Yahoo in third place with 11.3 per cent.

"The rankings are worth more than just bragging rights, too," he said.

"Yahoo has taken over the top spot in comScore's Ad Focus rankings as well with an 87.2 per cent reach. That means that a page owned by a Yahoo site was viewed by 87.2 per cent of the 225 million total Web visitors in July. That is well ahead of Google's 80.6 per cent reach. And that translates into higher ad rates and more revenue for Yahoo."

Since taking over, Mayer has been on a buying spree, and has also sold shares in China's Alibaba to boost its cash. Its most publicised deal was a billion-dollar acquisition of the blogging platform Tumblr, expected to help bring a younger audience to Yahoo.