You can still have adventures during the haze - by going indoors 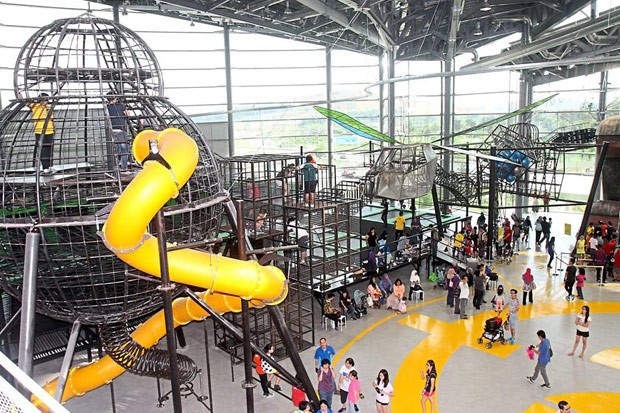 And parents are also probably pulling their hair trying to find ways to expend the excess energy of their children.

Even though we seem to be getting sporadic periods of clear skies, the burning has yet to stop in Indonesia. Every time the winds blows the "wrong way", we are shrouded in toxic smog.

So what are adventure fans to do? Indoor activities could be the solution.

According to ventilation engineer Yeong Wei Sen, most shopping malls and air-conditioned venues have air filters in their ventilation systems. This means that the air in indoor venues should be cleaner (from dust at least) than outdoor air.

On the other hand, some of these venues are housed in old warehouses or converted from factory buildings. They usually do not have air filters in their ventilation, hence the air pollutants in the haze can be found indoors as well, although the exposure will not be as severe as being outdoors, especially if they shut their windows during severe haze.

It is advisable for those with pre-existing respiratory problems or families with very young children to proceed with caution with regards to these latter places.

Exercising indoors brings to mind sports like futsal or badminton; the fitness gym is also an easy solution. But what if you yearn for something a bit more exciting, fun and adventurous?

Instead of sitting in despair on your couch and feeling miserable, these are some indoor adventure ideas in the Klang Valley for you (and your children) to move those limbs, work up a sweat, and get some adrenaline pumping again.

These are quite new in Malaysia and provide a multitude of vigorous activities under one roof.

One of the most exciting attractions to arrive in Malaysia is District 21, an indoor action adventure park located within IOI City Mall in Putrajaya.

For those yearning to get some blood-pumping action at height, the Free Fall and Roller Glider could be just what you need to put some butterflies in your stomach.

Those looking to stretch out their bodies and test their flexibility can try out the climbing walls at the Power Station and The Maze. There is also a low-adrenaline carousel for young children or those less physically-inclined.

Rock climbing is a popular sport that is available both indoors and outdoors. Most climbers start out in an indoor gym before testing themselves outdoors on real rock; even for professional climbers, indoor climbing gyms are essential for their training and conditioning.

Of course, most of us are not aiming to become pro; but indoor rock climbing can be a rigorous and healthy work out that can be done regularly.

As with any adventure activity that involves technical gear, it is important to undergo basic training to understand safety procedures and best practices. Most gyms offer belaying courses for beginners; and with this basic skill you can do top rope climbing.

Bouldering is a form of rock climbing that does not involve ropes as the walls are lower, and when you fall you land on cushions called crash pads; bouldering is good for improving climb technique.

There are several indoor venues around the Klang Valley for rock climbing but one interesting place is Madmonkeyz. Occupying two whole upper floors of a shop lot in Wangsa Maju, Kuala Lumpur, the place feels like a neighbourhood hangout.

They are focused on bouldering, and literally all available wall space in their premises are set up for this activity - including the ceiling and wall pillars! The first floor is divided between a shop and climbing space, and this is where children are welcomed as they can get full supervision from staff. For the regulars and challengers, the routes and holds on the second floor will be more inviting. They have even set up two top rope walls in the stairways for belaying classes.

Madmonkeyz has a cosy and casual environment. They attract a lot of climbers from the neighbourhood, as well as college students. They also attract climbers on their way from nearby Batu Caves, which is KL's premier spot for outdoor natural climbing.

Their premises are fully air-conditioned, hence they are safe from the onslaught of the haze. They have also set up some runners on a section of their wall for lead-climbers to practise their skills on overhangs.

While the haze envelopes the city, trapping heat in a dull, dreary mugginess, we can opt for a temporary escape into a winter wonderland - thanks to technology.

Ice skating has been around Malaysia for some time, and its popularity has not waned. According to Phua Hoong Yee, the rink manager at IceScape (also at IOI City Mall, Putrajaya), skating has benefits in improving balance and coordination, burns 600 calories per hour, and activates many core muscles while remaining easy on the joints. Currently there are three skating rinks nicely spread out across the Klang Valley for those looking for an indoor recreational activity that is both fun and, literally, cool. Most venues charge entry fees and rental fees for skates. To save money for an ice cream afterwards, bring your own socks and gloves.

Tucked away in a corner behind eCurve, the Royale Ice Skating is spread out over 448 square metres. The facility is bright and airy with plenty of window lighting, and the place is kept neat and orderly with an attentive crew.

On a weekday afternoon, the rink is popular with primary school children. Those trying out their legs on ice for the first time can rent out mini "penguin helpers". There are plenty of tables and chairs for parents to hang out while their kids blow off steam, and a small cafe is available on site for refreshments.

What if you want something a bit easier, and yet still have plenty of active movement that can include everyone in the family? And with mininal risk of injuries?

Laser tagging could be the answer. Here, each participant is equipped with an electronic vest and a laser gun. There are no bullets or paintballs involved; an accurately laser gun "shot" will "tag" and activate an opponents' vest to flash or vibrate.

It is as much a tactical as it is a physical game; there is plenty of action as teams move around an indoor arena, dodging and ambushing each other around the obstacles. But the game is relatively safe for all age groups as it requires no physical contact. Most venues only need a minimum of two pax to start a game.

Galactic Laser boasts a 15,000 square feet multi-storey arena in Mid Valley Megamall; at Sunway Pyramid they have another huge underground multi-storey arena. They do not have an age limit; instead participants must have a minimum height of 100cm.

Media representative Fraser Tan said that laser tagging can provide an intensive and fun indoor workout equivalent to hitting the gym, and is a fun way to get children to be active especially during the haze.