'Your son has special needs? So do my dogs' 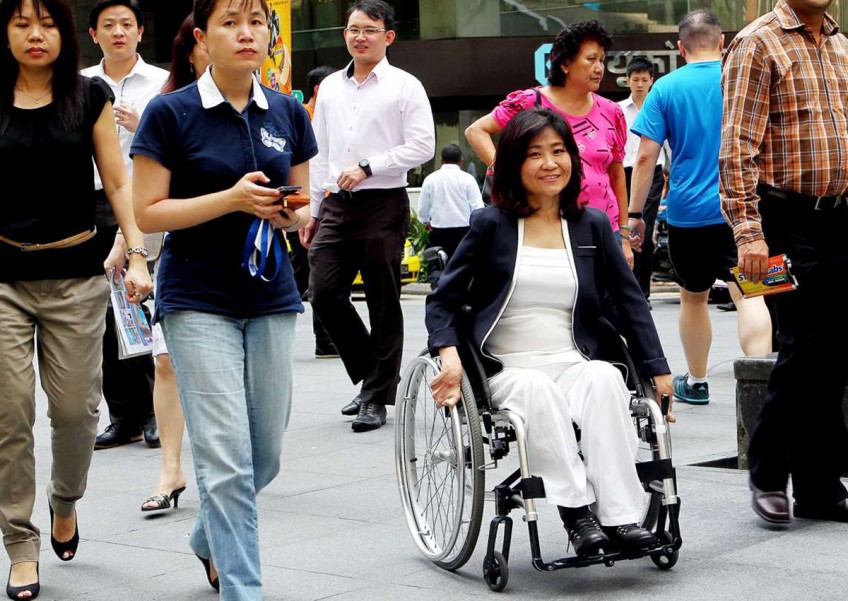 Many people know that MP Denise Phua (Jalan Besar GRC) has a son with autism, a lifelong developmental disability that affects a person's ability to make sense of the world and relate to others. But as with all families struggling with mental health conditions, theirs is often a lonely journey made worse by society's lack of understanding.

Take an incident that happened 16 years ago to Ms Phua's son, who was four at the time.

The boy saw two golden retrievers in a park and, drawn by their exuberance, went and played with them. Suddenly the dogs' owner appeared and pushed the little boy.

He fell on his face and cried. Ms Phua was shocked and asked the man why he would hit a child, especially one with special needs. The "big, burly man", as she puts it, responded flippantly: "Your son has special needs? So do my dogs!"

More than a decade later, social attitudes towards people who look outwardly normal even though they have hidden disabilities still reflect "a lot of stigma", says Nanyang Technological University assistant professor Natalie Pang.

So much so that Nominated Member of Parliament Chia Yong Yong drew awareness to disability and, in particular, people with "invisible" disorders, in a speech to Parliament last month.

Ms Chia also gave this moving first-person account of what life is like for a person with a less visible disability: "We hope for you to be accommodating when we make strange, loud noises. We can't control our muscles... Be kind to my parents when I throw tantrums. It is not because they did not teach me well. I simply cannot comprehend my external environment."

Her comments are timely as Singapore is expected to announce its third Enabling Masterplan - a five-year national plan to chart the development of policies and services for people with disabilities - by next year.

The 2007 and 2012 masterplans made inroads in ensuring that public transport and infrastructure are accessible to people with physical disabilities. Barrier-free routes were added to train stations and bus interchanges, and plans were made to have all public buses wheelchair-friendly by 2020.

Over the last five years, the Government added early intervention services that provide therapy and educational support for infants and young children with special needs, and added more capacity to residential facilities and day-care services for adults with disabilities.

But observers say that while infrastructure and services lay the foundation for an inclusive society, a key pillar is acceptance and understanding. One impatient glare or frustrated groan when a person with a learning disorder struggles with communication can undo the work of the best urban planners.

Unlike a person in a wheelchair, or one who uses a cane or wears a hearing aid, some conditions - such as autism, attention deficit hyperactivity disorder (ADHD) and intellectual or developmental disabilities - are not immediately apparent.

With a greying population, Singapore has more seniors with some form of disability due to dementia and other chronic conditions. There is also an increasing number of younger people with disabilities due to strokes or accidents.

These less visible disabilities are a double-edged sword, says research fellow Justin Lee of the Institute of Policy Studies. "The more visible they are, the more it attracts stigma, but it also means help is more forthcoming.

"The less visible it is, the less likely help will be forthcoming, and it may even take some time before a person or his support network realises he has a condition," says Dr Lee.

While a person with a less visible disability may pass off as being more "normal", not talking about it leads to lower awareness and greater stigma.

Those with invisible disabilities also seem to face more prejudice, which increases with how personal the contact is.

"People seem to be more open when considering a person with disabilities as political office-holders, as co-workers," he says.

"But when we asked if people were comfortable with having a person with disability in their families as a potential romantic partner, all of a sudden there would be some discomfort."

However, Mr Ho notes that his participants, when asked about people with disabilities, immediately thought of physical disabilities and forgot that disabilities include mental and sensory impairments.

The president of the Disabled People's Association (DPA), Mr Nicholas Aw, says: "Without widening our understanding of the range of disabilities, we will never be able to adapt our society to include all persons with disabilities, and those with invisible disabilities will continue to be left behind."

WHAT IS A DISABILITY?

One difficulty in getting people to recognise or be aware of less visible disabilities stems from a lack of consensus on what constitutes disability. Even the authorities previously did not acknowledge some conditions as disabilities when deciding who is eligible for financial services or other support.

The Enabling Masterplan defines persons with disabilities as "those whose prospects of securing and retaining places and advancing in education and training institutions, employment and recreation as equal members of the community are substantially reduced as a result of physical, sensory, intellectual and developmental impairments".

A Ministry of Social and Family Development (MSF) spokesman says: "This definition takes into account the level of functionality of the person, not only by medical standards, but more holistically with regard to his or her overall social functionality."

But this differs from that of the United Nations Convention on the Rights of Persons with Disabilities, because those with mental health impairments - such as depression, schizophrenia and bipolar disorders - are left out.

When asked about this, the MSF says not all mental illnesses result in disabilities, and with medication and treatment, patients are able to function well on their own.

"Today, the management of mental health issues falls under the purview of the Ministry of Health (MOH)," it says. "A person with disability, regardless of whether it is physical or non-physical in nature, will thus be supported by MSF and MOH, taking into account both his medical needs and his overall social-functional needs."

This means those with mental illness do not qualify for MSF disability schemes such as transport concessions, which MSF says is "primarily a scheme for persons with disability such as physical, sensory, intellectual disabilities and autism".

HOW SOCIETY MAKES IT DIFFICULT

Disabilities that are not apparent are sometimes subject to harshBasic pageer judgment, experts point out.

"Some might think you are out to get an unfair advantage if you don't look like you need that assistance, or to validate the use of that reserved parking space," says Mr Ho.

The DPA's Mr Aw knows of a lecturer with irritable bowel syndrome - Ms Christine Keung, in her 50s - who needs to use a toilet designated for the handicapped so she can clean herself. Such toilets usually have a basin or bidet spray. Yet on several occasions, she has been scolded by people who are cynical about her medical condition.

Even when symptoms of the disability are manifested, such as when an ADHD student fidgets with staplers in class, Mr Aw says not all teachers in mainstream schools recognise them.

"So the children are punished and made to go without recess for behaviours which are natural to them," he says.

Ms Anita Fam, who chairs the Enabling Masterplan committee, says: "Much of it stems from a lack of awareness or understanding of disabilities which are less visible.

"For example, when we see a child with autism having a meltdown, we may stare, or even video with our camera phone, or beat a hasty retreat because of fear."

HOW TO MAKE IT BETTER?

For people to better understand and support those with less visible disabilities, more research needs to be done to determine the extent of, and areas of, discrimination as well as the types of disabilities that are being discriminated against.

Not much data or findings are available yet, but more organisations are starting to look into this.

The National Council of Social Service has done a study involving 1,400 people to find out how they feel about those with disabilities, including less visible ones.

The study also aims to determine the perceived level of opportunities and inclusion towards people with disabilities, particularly in social interaction and access to services and facilities. The findings will be released next month.

The Lien Foundation has polled more than 1,000 people on attitudes and concerns Singaporeans have towards social inclusion, and inclusive education for children. Its findings will be out later in the year.

The DPA will also be studying barriers and discrimination in the workplace, and see if existing policies are enough to tackle the issues, or if further legislation is needed.

Some have suggested introducing laws, such as along the lines of Australia's Disability Discrimination Act, which protect those with disabilities against discrimination at work and school, and also protect their relatives, caregivers and co-workers.

For example, it is illegal in Australia to refuse a parent a job because he or she will need time off work to look after a child with a disability.

Others have called for children to have more interaction with their peers who have disabilities, to reduce stigma.

"Once children or people with disabilities become segregated and isolated, they risk becoming invisible, forgotten and discriminated by the wider society," says Mr Lee Poh Wah, chief executive of the Lien Foundation, which has funded a pre-school that promotes inclusion, where children with special needs learn alongside other kids.

"Physical barriers are the easiest to identify and correct, but to change attitudinal barriers - which stem from fears and often wrong assumptions - we must look at our society, our education system and within ourselves," he adds.

Mr Aw says all organisations should have a person whose responsibility is to ensure diversity and inclusion, to help integrate those with disabilities and raise awareness.

For example, Ms Fam notes that the police have trained volunteers under their appropriate adult scheme to help someone with an intellectual disability during interviews should they be arrested.

However, observers note that people with a "hidden" disability often choose not to declare it due to fear of discrimination.

Mr Ho says: "It can be a vicious cycle, with people with invisible disabilities choosing not to discuss the issues, and everyone being none the wiser."

He has learnt through interacting with disabled students in the course of his work that self-acceptance makes a difference.

Those with no option to conceal their disability tend to be more confident and sociable, he says.

"They have less qualms about speaking up, seeking assistance, using the accommodations offered to them and dispelling misconceptions about their conditions."