Youth games in China set an example of frugality 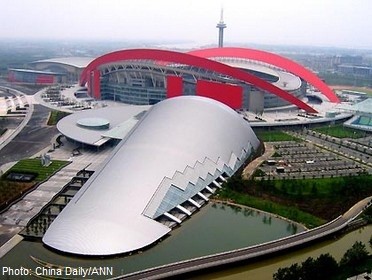 The organizers of the 2nd Asian Youth Games, which opened on Friday at the Nanjing Olympic Center Stadium, hope to set an example of frugality to young people in accordance with the recent call from leaders to cut back on extravagant spending.

Unlike the magnificent and star-studded ceremonies of most international sports events, the games invited young people to participate to highlight the event as a festival for younger generations, according to Yang Weize, executive chairman of the organising committee.

It's also lighter on the budget, he added.

According to Yang, the cost of the opening and closing ceremonies is only one-tenth of the cost of sports events of the same size.

"The (international sports event) ceremonies normally involve more than 10,000 performers, but we only have about a thousand, composed mostly of young people instead of stars," he said.

The decision reflected the event's main goal of holding a thrifty event in accordance with the country's new leadership's appeal to cut back on extravagance.

The total budget of the Nanjing Asian Youth Games will be less than 1 billion yuan (S$206 million), and ideally under 700 million yuan if possible, Yang said.

Instead of building new facilities, the city is using previously built stadiums.

Only one new rugby stadium, which will open to the public after the games, was built for the Asian Youth Games.

The other 26 stadiums required minor renovations.

According to Cheng Yuan, a publicity officer of the Nanjing Youth Olympic Park, more than two-thirds of the new stadium's seating, about 6,000 seats, are rented, and only about 3,000 are fixed for future use.

"This has saved more than 20 million yuan," she said.

In addition to the rugby stadium, the park will house three more newly constructed venues to be ready for the Youth Olympic Games to be hosted in Nanjing in 2014.

Most of the stadiums' facilities will be temporary and movable, a decision that greatly reduces the cost of the games, according to Cheng.

Since the park will become a fitness centre for residents after the games, installing brand new facilities would have been a waste of money, she said.

Considering the high energy and resource consumption of some large-scale stadiums, many of these venues are equipped with energy-saving features, including an external sunshade and water source heat pump, according to the organizer.

To save on air-conditioning costs, staff at the handball stadium at the Nanjing University of Technology are using an alternative method for keeping the temperature cool. They use a box filled with ice to absorb the heat.

"The competition temperature of handball is required to be 24 C," said Leng Qingfeng, manager of the stadium's service team.

In addition to the facilities, organizers have also reduced costs by cutting redundant jobs.

Most of the staff are multi-tasking and many bring their own computers to work, said Cheng.

"We insist on spending every cent to its value in preparation for the games, and we hope, apart from experiencing the sport, that young people will learn the value of being thrifty," Yang said.

The event will close on Aug 24. More than 2,600 athletes from 45 countries and regions will compete in 118 events in 16 sports. Staff serving the games will continue to work for the Youth Olympic Games next year.