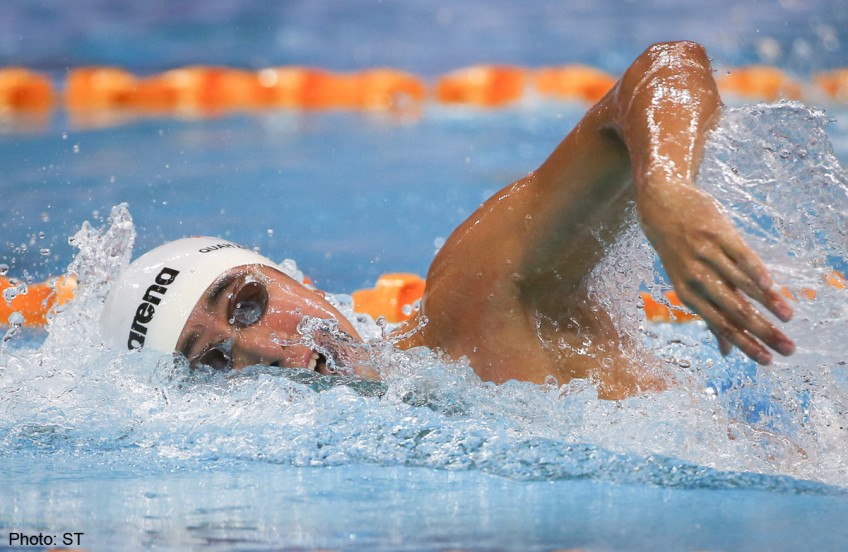 Quah Zheng Wen in action in the 200m free final on Tuesday. He is the first Singapore man to go below 50 seconds in the 100m free.

After breaking two national records in the span of 12 hours, there was an air of anticipation when national swimmer Quah Zheng Wen stood on the blocks for the 100m freestyle final at the OCBC Aquatic Centre last night.

After all, he had broken the 100m backstroke mark on Tuesday night, and followed that up by becoming the first Singaporean man to go under 50 seconds in the 100m freestyle yesterday morning, when he clocked 49.89 seconds in the heats at the Singapura Finance 46th Singapore National Age Group Championships.

That allowed him to eclipse Joseph Schooling's previous mark of 50.05 set during last July's Glasgow Commonwealth Games and join Schooling as one of the top two qualifiers in the event for June's SEA Games.

Naturally, the crowd were hoping for a third success.

But while Zheng Wen won the race, he fell short in terms of another record-breaking effort, clocking 50.19 in the final.

"I was pretty apprehensive. If there's pressure, it's comes from within rather than anyone else," the Swimfast Aquatic Club (SAC) representative said.

"Inevitably, you expect yourself to break (the record) again so it was a bit disappointing afterwards but I believe I have done fine.

"Doing well in the 100m is a bonus. It's a sprint and freestyle is especially competitive at international level, so I'm keen to focus my efforts on the 200m and 400m."

Yet national head coach Sergio Lopez believes that this is just the beginning of much more to come from his swimmers after hailing a landmark day for Zheng Wen.

He said: "We cannot put a limit on what our athletes can achieve. Breaking the 50sec mark is a good thing for Singapore because it means a psychological barrier has been lifted."