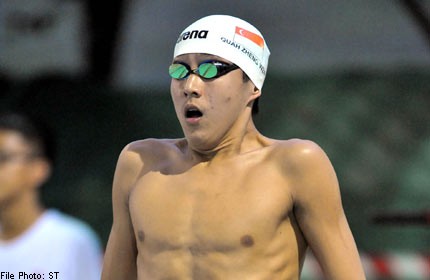 Quah Zheng Wen at the start of the 200m butterfly event during the 8th Singapore National Swimming Championships on 9 August 2012.

Coach Gary Tan said: "He is getting better by the day but he has definitely lost a lot of muscle definition because of his illness and we are glad that he pulled through to get the gold medal."

The timing was off Zheng Wen's personal best and national record of 2:01.18, achieved at the Singapore National Age- Group Swimming Championships in March last year.

But it marked the teenager's second triumph in the Games, after his 200m butterfly win on Monday.

The 2012 Olympian also clinched silvers in the boys' 200m freestyle and the 4x100m freestyle relay on Tuesday.

Other than Zheng Wen's gold, Singapore won three silvers and a bronze in the pool on Wednesday.

And barely five minutes later, the teenager got back into the pool again and clocked 23.42 in the second semi-final of the boys' 50m freestyle to qualify as the top swimmer in Thursday's final.

Tan said: "Darren also has a bit of the flu but it was quite interesting to see how he did the 50m fly and the 50m free back to back and did well in both events."

Samantha Yeo added two silvers to her collection after finishing second in the girls' 100m breaststroke with 1:10.71, behind South Korea's Yang Ji Won (1:09.63).

Tan applauded his young charges for stepping up to the plate, despite the team grappling with illnesses and a more hectic competition format at the Games.

The former national swimmer said: "We've tried our best to quarantine the sick swimmers but we've also asked the swimmers to deal with the situation and to step up.

"Unlike local meets, where we have the heats and the finals, swimmers have to go through the heats, the semi-finals and the finals at the AYG, which may mean some swimmers would swim six or sevent events a day.

"But I am glad that the swimmers have stepped up, and they have shown great team spirit in cheering each other on in the races.

"They are the faces of a new generation of swimmers coming up and they feel a sense of responsibility in doing well for Singapore."