Keppel 'well poised to be front runner in gas market' 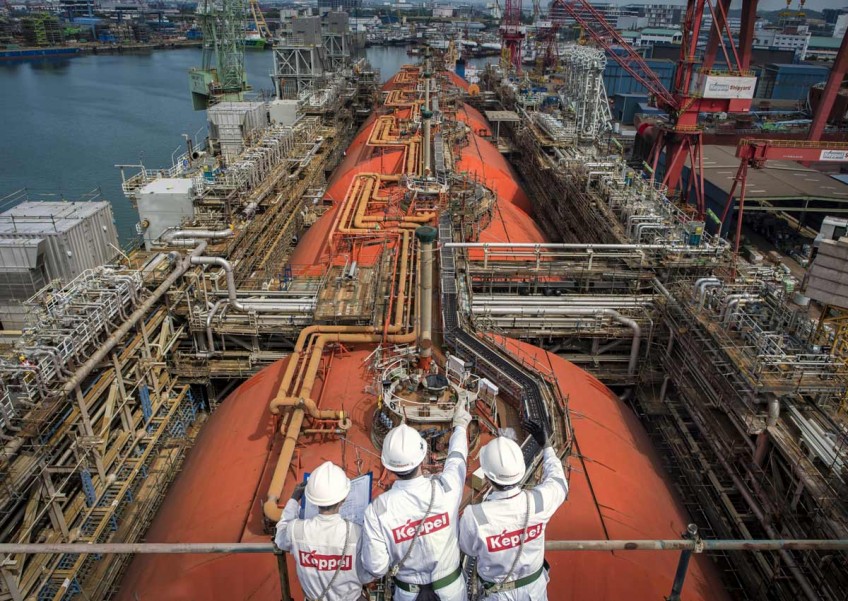 Keppel's work on the Golar Hilli - set to be the first-of-its-kind conversion of a floating liquefaction vessel - is on track for completion later this year, says chief executive Loh Chin Hua. This will put the group "ahead of the curve" for floating LNG solutions. Mr Loh also noted that the group has seen good inquiries for gas solutions and other production assets.
Keppel

Keppel Corporation is well positioned to be a front runner in the gas market, chief executive Loh Chin Hua said in the group's latest annual report.

Keppel already has an extensive gas strategy spanning the value chain - from liquefaction to transport and power generation - in an industry poised for growth.

In the report, released yesterday, Mr Loh noted that gas is expected to be the fastest-growing fossil fuel over the next few decades - with demand rising at 1.5 per cent a year from now to 2040 to make up one- quarter of global energy demand.

The group, together with energy giant Shell, with which it set up a joint venture for liquefied natural gas (LNG) bunkering in July last year, aims to build a global bunkering network to serve shipowners across their travel routes, he said.

Singapore is positioning itself to be the Asia-Pacific hub for LNG.

"Being the front runner in LNG allows us to push the envelope for the use of LNG as a marine fuel, creating pull-through opportunities for our yards," said Mr Loh.

He told The Straits Times in an e-mail interview that Keppel can, for instance, develop floating liquefaction vessels, floating storage and regasification units, and floating power barges, as well as offer solutions for break-bulk services to facilitate the distribution and use of LNG in the region and beyond.

He said work on the Golar Hilli - set to be the first-of-its-kind conversion of a floating liquefaction vessel - is on track for completion later this year.

This will put Keppel "ahead of the curve" for floating LNG solutions.

"A critical objective is to look for new top line to fill the gap until new orders for drilling rigs return to the market," said Mr Loh, referring to the ongoing, protracted downturn that has hit Keppel's offshore and marine business.

But he noted that the group has seen good inquiries for gas solutions and other production assets.

He said headwinds for Keppel Offshore & Marine (Keppel O&M) are set to remain in the short term, even as the group remains positive on longer-term prospects.

It has mothballed two overseas yards and is in the process of closing three of seven yards here.

"Right-sizing can go on only so far," Mr Loh said. "Our purpose is to ensure Keppel O&M emerges from this down cycle well entrenched in its leadership position in the offshore and marine industry."

He reiterated that Keppel's multi- business strategy has been key in helping the group stay resilient.

"Our performance in the past two years would have been much weaker had we been a single-business company against this offshore industry downturn."

The property, infrastructure and investment divisions together contributed about 96 per cent of the group's overall net profit last year, up from 68 per cent in 2015.

Mr Loh said that while Keppel's main businesses are in different industries, they are all involved in providing solutions for sustainable urbanisation - whether it is to meet the need for energy from fossil fuels or renewables; connectivity for telecommunications, data or urban logistics; or clean environment or urban space.

This article was first published on March 31, 2017.
Get a copy of The Straits Times or go to straitstimes.com for more stories.