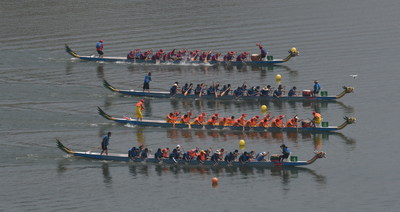 In the running-up to China's traditional Dragon Boat Festival, which falls on June 18 this year, a grand dragon boat competition was held in Yichang's Zigui County.

The state council, China's cabinet, proposed in the 2018 government work report in February to advocate excellent traditional culture of Chinese nation and build a prosperous cultural society with Chinese characteristics.

Over 150 distinctive activities at grass-root level have since been held in Yichang.

Moreover, the city government has invested more than 10 billion yuan (1.6 billion U.S. dollars) in major cultural infrastructure, including the new city museum, urban planning exhibition hall, sports center, science and technology museum and activity center for women and children. About 95 percent of villages and communities are equipped with standard entertainment square, according to Yichang Municipal Government.

An average of over 80 large-scale poetry activities are held every year, with 100,000 participants from local communities. An estimated over 400,000 residents participated in various kinds of poetry activities last year in the city.

The city is also home to 15 poetry research and creation teams, and 39 poetry societies.

In the running-up to China's traditional Dragon Boat Festival, which falls on June 18 this year, a grand dragon boat competition was held in Yichang's Zigui County, hometown of the ancient Chinese poet Qu Yuan, who lived during 340-278 BC and wrote The Songs of Chu.

The competition has been going on in the ancient town for centuries. A worship ceremony to commemorate Qu Yuan was held before the race, drawing tens of thousands of local audience.

On the morning of June 15, a man surnamed Qin brought his three-year-old grandson to the racing lake. "It's a must-see activity every year for our family. Without the dragon boat regatta, the festival can hardly be called one. It's also important to let our younger generation feel and learn something about Chinese tradition," he said.

The county government of Zigui on June 3 also brought a folk melodrama based on Qu Yuan to Beijing and presented citizens in the Chinese capital an original cultural feast.

The Zigui Quyuan art troupe consisted of 23 artists once flew to Canada to perform in July 2016. It was the first time for a county-level troupe to attend an art festival in a foreign country in the whole province. Yichang is also a prolific city in artistic creation and presented various performances on provincial and state level channels.

The city has been crowned with more than 400 artistic awards.

With its cultural name cards welcomed across the country and even the world, Yichang is more confident than ever about its cultural identity.