A factory fire has killed 19 people in eastern China, local authorities said on Monday, in the latest deadly incident to hit the country's industrial sector.

The fire broke out on Sunday at a factory in Ninghai county, Zhejiang province, the local government said on Weibo.

The blaze, which is under investigation, occurred at a facility owned by the Ruiqi Daily Necessities Company.

Eight people were rescued from the fire, of whom three were injured and sent to hospital for medical treatment, Ninghai authorities said.

It was one of several deadly incidents on the weekend before Tuesday's 70th anniversary of the founding of the People's Republic of China.

A packed bus collided with a truck in the eastern Jiangsu province on Saturday, killing 36 people. 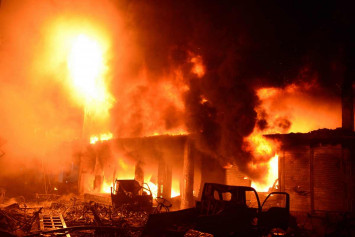 Industrial accidents are common in China, where safety regulations are often poorly enforced.

In March, a blast at a chemical plant in Jiangsu killed 78 people and injured hundreds.

Last November, a truck carrying combustible chemicals exploded at the entrance of a chemical factory in the northern city of Zhangjiakou - which will host the 2022 Winter Olympics - killing 23 people and injuring 22.