A mother in Beijing was left shocked and horrified after her 5-year-old daughter was electrocuted right in front of her in a mall.

The incident happened when the girl touched a metal pole that was a part of a decorative installation at the Beijing Parkview Green shopping mall on June 1, reported Shanghaiist.

In a chilling video, the girl can be seen playing along the walkway. She then grabs one of the poles installed and suddenly starts convulsing for several seconds, before collapsing onto her side and starting to cry as others rush over.

"I initially thought that she was playing a fool when she was lying on the floor. After a few seconds, I realised she had been electrocuted," the mother, who was only identified as Shi, told The Beijing News.

Shi said that her daughter's lips turned purple and her fingernails black. There was also the smell of rust in the air.

Alarmed, she immediately brought her daughter to the hospital. Following a check-up, the family was told that while there were no internal injuries, there were some slight abnormalities in her daughter's electrocardiogram.

The doctor instructed Shi to observe the child at home and return to the hospital if she noticed anything unusual.

Regarding the mall, Shi still has more questions than answers over two weeks since the accident. 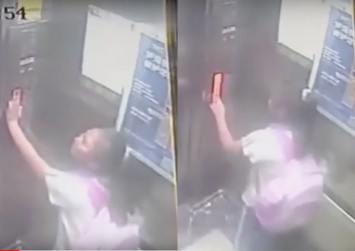 Beijing Parkview Green issued a statement on June 17, saying that the accident was caused by a contractor who had not followed their requirements.

The mall added that they have dealt with the contractor and would take responsibility.

A representative from Beijing Parkview Green told The Beijing News that the walkway had passed electrical inspections in May. However, after the accident, they realised that the installation was missing a grounding wire.

Grounding is important because in the case of any short circuit or electrical fault, the current is sent to the ground instead of bystanders.

Shi is preparing legal action after the mall did not agree to her request for 30,000 yuan (S$5,900) in compensation and a copy of the electrical inspection report.

She said, "Is the report falsified or is the mall trying to mislead us and bury this safety risk? Not only do I want an explanation for my daughter, I want people to be more aware of incidents like this."

After the news circulated on Weibo, netizens expressed support for the family and demanded more accountability from the mall.

#china #Safety #child #In Case You Missed It