A hospital in Jiangxi, China, has recently suspended a traditional Chinese medicine (TCM) therapy after 92 children suffered from burns after receiving the treatment.

Known as sanfutie (三伏贴), the treatment usually involves applying medicated patches on various acupuncture points on the patient's back to treat illnesses.

According to Chinese media, 881 children received the treatment from July 12 to 13.

With Jiangxi Provincial Hospital's reputation as a trustworthy and top-tier medical facility, the therapy was highly anticipated by parents, said a mother, Wu Meng (pseudonym), whose daughter and son received the treatment.

10 minutes after application of sanfutie, however, her daughter "could not bear it any longer and ripped off the medicinal patch," she said.

Meanwhile, her son bore the brunt of the effects of the treatment which lasted for two hours.

By night time, his skin started to turn red. The boy cried constantly, was unable to eat and maintained a high fever for 20 hours, Wu told Red Star News.

According to investigations, the reason behind the children's adverse skin reactions to the TCM treatment was a change in the formula of the herbal paste that was used.

Young ginger was replaced with old ginger and the alcohol concentration of the paste was increased from 56° to 62°.

Hospital staff had believed that the new formula would be more effective.

Instead, the 'improved' formula saw children suffering adverse skin reactions, ranging from redness and swelling of the skin, blisters, broken skin, to burns.

Parents have appealed to the hospital to conduct an examination to prove that the treatment has no toxic side effects, and publish the components of the herbal paste, so as to reveal whether it contained any harmful ingredients.

Meanwhile, the Provincial Administration of Traditional Chinese Medicine and Provincial Health Commission has instructed the hospital to dismiss the staff responsible for the incident and also provide sufficient follow-up treatment for the affected children.

Read Also
Woman gets third-degree burns from TCM therapy: What is moxibustion? 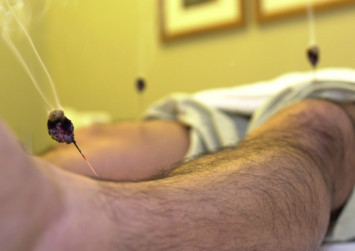 Such an incident is not the first of its kind.

Red Star News reporters have discovered that many hospitals in Guangdong, Shandong, Henan, and other places have promoted sanfutie treatment.

Patients who underwent the treatment at said hospitals also suffered from burns.