HONG KONG - Hong Kong's first legislature meeting of 2022 may have to be held online, its council president said on Monday (Jan 10), after over 30 officials and lawmakers were quarantined following Covid-19 infections at a birthday party of a delegate to China's legislature.

Mr Andrew Leung, the city's Legislative Council president, said four legislators remained in quarantine ahead of Wednesday's meeting, while sixteen others need to be tested again.

"If we cannot hold a physical meeting, then we will switch everything to zoom mode," he told a media briefing.

Mr Leung's comments come after 11 government officials and 16 lawmakers were released from quarantine on Saturday after authorities said they were less likely to have been exposed to infected guests at a party last week.

The party for the 53rd birthday of Mr Witman Hung, a delegate to the national legislature, took place on Jan 3 with close to 200 people, before leader Carrie Lam imposed new restrictions on social life on Jan 7 Mrs Lam appealed to the public to avoid large gatherings.

Mrs Lam has ordered an inquiry into the behaviour of 13 senior government officials to see if any laws were broken. 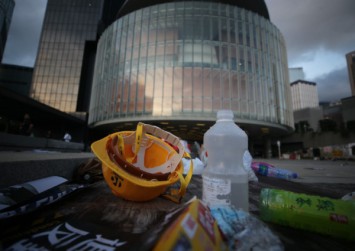 The released officials are required to isolate at home using their own vacation leave, according to a government statement.

The timing comes as residents are increasingly weary of new restrictions.

The city saw a three-month streak of no community transmission broken on Dec 31, with the confirmation of the city's first local infection with the fast-spreading Omicron variant.

Several more cases have been detected since and hundreds of close contacts have been sent into government quarantine facilities for up to 21 days.

Since the pandemic began in 2020, more than 200 people have died in Hong Kong from coronavirus with over 12,800 infected, far fewer than in most of the world's big cities.

Around 4.7 million people, or just under 70 per cent of the eligible population has received two shots of either the BioNTech or the Sinovac vaccines, much lower than in other developed cities.