The logo of Foxconn is pictured on top of a company's building in Taipei, Taiwan, on Oct 31, 2022.

Apple supplier Foxconn said on Tuesday (Nov 1) it has quadrupled bonuses on offer for workers at its Zhengzhou plant in central China as it works to quell employee discontent at the major iPhone manufacturing site over Covid curbs.

Daily bonuses for employees, who are part of a Foxconn unit responsible for making electronics including smartphones at the site, have been raised to 400 yuan ($77) a day for November from previously announced bonuses of 100 yuan, according to the official WeChat account of Foxconn's Zhengzhou plant.

Foxconn, formally Hon Hai Precision Industry Co Ltd, is Apple's biggest iPhone maker, producing 70per cent of iPhone shipments globally. It makes most of the phones at the Zhengzhou plant where it employs about 200,000 people, though it has other smaller production sites in India and south China.

The Zhengzhou plant has been rocked by discontent over stringent measures to curb the spread of Covid-19, with several workers fleeing the site over the weekend after complaining about their treatment and provisions via social media.

Reuters reported on Monday, citing a source, that the production of iPhones in November could slump by as much as 30 per cent at the plant due to the situation and that Foxconn was working to boost production at another factory in Shenzhen to make up for the shortfall.

Foxconn's shares were down 1per cent on Tuesday, lagging a 0.4 per cent rise in the broader index.

The original bonus scheme was initially outlined in an article on Monday by the government backed Henan Daily newspaper citing a senior unnamed Foxconn executive.

Foxconn's notice on Tuesday also said those who work for more than 25 days could get a maximum bonus of 5,000 yuan for the month, the company said, up from previous maximum of 1,500 yuan, as part of an effort to "gradually resume orderly production" and to "thank our fellow employees' persistence."

Those who put in their "full effort" during November, including forgoing any leave, could be paid a total of over 15,000 yuan for the month, the notice added.

Videos circulating on social media appear to show departing Foxconn workers laden with luggage and walking along village roads towards their home towns.

The footage, which could not be independently verified, as well as accounts employees shared with Reuters have illustrated the disruptions China's zero-Covid policy are causing to both the public and businesses.

The country's zero approach towards Covid-19 requires localities to act swiftly to curb outbreaks with measures including lockdowns, but it allows factories in affected areas to stay open on condition they operate under a "closed loop" system where staff live and work on-site. 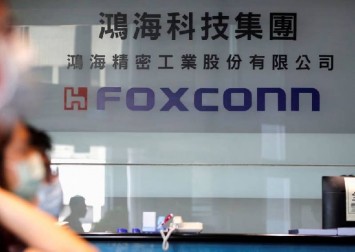 However, businesses have complained about the difficulties of the system and the toll on staff. Many people who said they were Foxconn workers turned to social media to complain about receiving insufficient food or about the uncertainty of the situation.

The senior executive cited by the Henan Daily said Foxconn started carrying out daily Covid testing for its staff at the site on Oct 10, and three days later implemented the closed loop system by moving staff living off-site into its dormitories.

Foxconn did not immediately respond to a request for comment on the Henan Daily article. The Henan Daily is the official newspaper of Henan province, of which Zhengzhou is the capital.

Foxconn has not disclosed whether any workers at the Zhengzhou site had been diagnosed with Covid-19 but the executive told the Henan Daily that there had been no severe infections and the company had set up a team to transfer infected staff to quarantine.