Dozens have taken shortcuts while one hopped on a bike -- cheating by Chinese marathon runners has become so rampant that there are warnings it is harming the country's reputation.

Running has taken off in China with competitors wearing the latest trendy gear and boasting of their achievements on social media or on job applications to boost their employment prospects.

But race organisers are struggling to keep up with a growing number of attempts -- some laughably audacious -- to break the rules.

The Chinese Athletic Association (CAA) issued lifetime bans to three runners who cheated at the prestigious Boston Marathon in April.

Two of them presented forged certificates to fraudulently reach the strict entry standard while the third gave his bib to someone else to run for him. 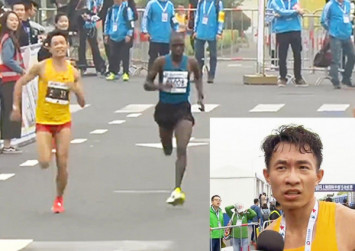 Their behaviour "had a negative impact on China in the (international) community", the CAA said in a statement.

An official with the CAA's marathon department who spoke on condition of anonymity told AFP the association was investigating cases of cheating at other marathons in China.

Some cheats have not been so subtle.

In March a woman was filmed riding a green rental bike in the Xuzhou International Marathon in eastern China and at November's half-marathon in Shenzhen more than 250 runners cheated, including many who took shortcuts.

Traffic cameras caught participants darting from one side of the road to the other.

The Beijing government is encouraging long-distance running as part of a broader fitness campaign.

In 2011 there were just 22 marathons, half-marathons or other running events in China, but that rocketed to about 1,500 last year, according to the CAA.

Chinese media says "marathon fever", especially among the middle class, means that some events are disorganised or unregulated -- and vulnerable to cheating.

The CAA, which in December issued regulations aimed at cleaning up the sport, declined to tell AFP how many Chinese runners have broken the rules.

But Yu Hongchen, a CAA vice-president, told the China Daily: "Chinese marathon development has encountered many difficulties, the first of which is the lack of a marathon culture and awareness of the rules." 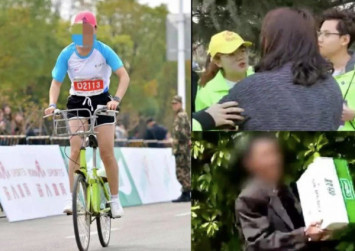 That "lack of a culture" means some people -- eager to show off to friends or prospective bosses -- are woefully underprepared for the gruelling demands of a marathon.

The International Association of Athletics Federations (IAAF), the world governing body, endorsed January's Xiamen Marathon as one of its "Gold Label" road races.

But that did not prevent at least five people cheating, one of whom sported a mocked-up bib.

Paco Borao, president of the Association of International Marathons and Distance Races, said Chinese runners were not the only ones seeking to gain an unfair advantage.

"It is true that some nationalities -- from the Mediterranean area, Africa, South America, China -- are areas where cheating seems to be a national sport and people enjoy testing organisations," he said.

"China is part of such a group but not a special concern."

Some marathons in China, including an upcoming event in the northeastern city of Dalian, are using facial recognition to root out rule-breakers.

The Great Wall Marathon, which takes place on May 18 at China's most famous landmark, is confident it can do without the technology, but is on heightened alert.

"Cheating hasn't been a big problem at the Great Wall Marathon so far," said race and event director Lars Fyhr, putting the number of past attempts at "probably a handful".

He declined to give details because "I don't want people to get 'good ideas'".

"We have timing checkpoints on the route so we can see if a runner didn't pass all those," said Fyhr.

"We also have video recording at these time checkpoints so in disputes we can look at the video to see if someone passed or not."