Dogs may be a man's best friend but money still makes the world go round, at least for this penny-pinching dad.

Facing mounting medical bills, a father in Anhui province, China tried to kill his daughter's sick pet dog right in front of her by viciously beating it at an animal hospital on Oct 2, said media reports.

CCTV footage captured the horrifying moment that the man grabbed the dog out of a veterinarian's hands and flung it onto the floor.

He then kicked the dog repeatedly as his young daughter tried to block his blows and push him away.

The veterinarian at the animal hospital told reporters that the dog was suffering from heart disease and had been receiving treatment for four days before the incident, costing the man 500 to 600 yuan (S$97 to S$116).

Seeing that the dog was in critical condition, the veterinarian had agreed to waive the medical fees if it did not survive.

Soon after, the dog's condition improved slightly and the man was told that additional treatment would cost 300 yuan.

However, he refused to pay and insisted on removing the dog from the animal hospital.

When told that he had to settle the outstanding medical bill before taking the dog, the man flew into a rage.

"If the dog dies, I don't have to pay right?" he said before grabbing the dog and attacking it.

Fortunately, the dog survived the ordeal and is now in stable condition. 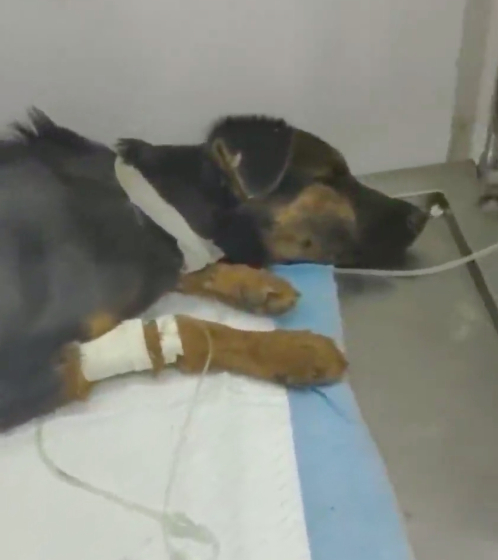 The father reportedly bought the dog for his daughter after she had begged for one. However, in an effort to save money, he ended up getting a cheap dog plagued with health problems.

After footage of the incident circulated online, netizens sympathised with the dog and condemned the father for his actions.

"If you don't have money, don't get a pet! He even used violence in front of his daughter!"Photo: Screengrab/Weibo

"He's not worthy to be a dog owner and even less worthy of being a father."Photo: Screengrab/Weibo

"When he first got the dog, did he think that it was a toy dog? Or that it wouldn't fall sick? If you don't like dogs then don't raise one. If you are raising a pet then you should be responsible for it. His daughter will definitely be traumatised for the rest of her life."Photo: Screengrab/Weibo

#china #animal abuse #parenting #Dogs #In Case You Missed It