Pedestrians wade through floodwaters on a street amid heavy rainfall as Typhoon Chaba hits Sanya in Hainan province, China July 2, 2022.

BEIJING —Typhoon Chaba weakened into a tropical depression, but it is still expected to bring heavy rain in the central and eastern part of China over the next few days as it moves northward, Chinese forecasters said on Monday (July 4).

The Central Meteorological Observatory lifted the typhoon blue warning on Chaba late on Sunday, but over the weekend China's first typhoon of the year bought heavy rain and wind to several southern provinces already water-logged from weeks of torrential rains and thunderstorms.

As of early Monday morning, the centre of Chaba was located in the southern region of Guangxi. It is expected to move in a north-easterly direction at a speed of 10 to 15 km per hour into Hunan and Hubei provinces, the China Meteorological Administration said.

A red rainstorm alert was also issued for the city of Dongguan in Guangdong province. In the Guangxi region, local forecasters issued red rainstorm warning signals for Bobai and Luchuan counties, expecting heavy rain for most of the morning.

From Monday to Wednesday, forecasters predict heavy rain and some strong winds in Guangdong province, the Guangxi region, and Jiangxi, Hunan, Hubei, Henan, and Shandong provinces.

Strong rainfall is expected in North China and Northeast China, and other places through early next week. 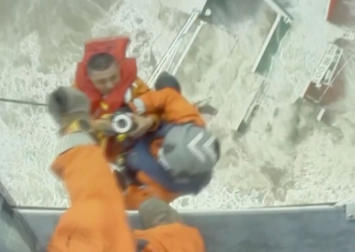 Over this past weekend, more than two dozen crew on an engineering vessel with 30 people on board went missing after it snapped in two in waters off Hong Kong as Chaba passed through, authorities said.

In recent weeks, historic rainfall and flooding in southern China have destroyed property, paralysed traffic and disrupted the daily lives of millions.