Chinese customs officials inspect scales of pangolins that were seized on a ship in Shenzhen, Guangdong province, China.

HONG KONG - Chinese traditional medicine is rapidly expanding worldwide as a key pillar of the country's Belt and Road initiative, but conservation groups say demand for treatments using animal products is driving a surge in illegal trafficking of wildlife.

Since the start of the year, authorities in the Chinese territory of Hong Kong have seized record volumes of threatened species, including 8.3 tonnes of pangolin scales from nearly 14,000 pangolins and its largest ever haul of rhino horns, worth more than US$1 million (S$1.35 million).

The former British colony is one of the world's primary wildlife trafficking transit points, supplying an array of products including shark fins, tiger parts and rhino horn across Asia and into mainland China.

"One of the most alarming characteristics of wildlife trafficking is the growing use of threatened species in traditional medicines," conservation group ADM Capital Foundation said in a recent report. 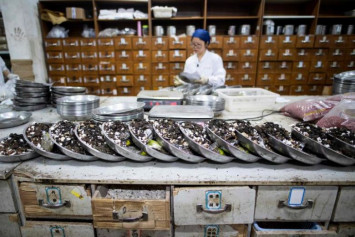 It identified the traditional Chinese medicine industry as accounting for more than three-quarters of the trade in endangered wildlife products in Hong Kong over the past 5 years.

China's State Council has outlined a multi-decade plan to promote traditional medicine, including setting up hospitals, museums, medicinal zoos and botanical gardens in countries involved in its Belt and Road infrastructure rollout.

The industry is booming.

Worth some US$60 billion a year, according to a World Health Organisation (WHO) Bulletin, and growing at around 11 per cent annually, according to IBIS World, practices such as acupuncture and herbal supplementation are finding acceptance globally.

The WHO says it will formally recognise traditional medicine in its compendium in May, meaning more mainstream recognition of practices dating back more than 2,500 years.

While many practitioners have shunned the use of endangered species, environmental groups say traditional remedies including rare animals are still popular in Vietnam and China, where they are used for a range of ills from cancer to skin blemishes and hangovers.

Species including pangolin, rhino, saiga, sea horses, moon bears and tigers are some of the animals critically endangered by the trade, according to wildlife organisations.

Mr Zhou Jinfeng, Secretary-General of China Biodiversity Conservation and Green Development Foundation, said the WHO should take sustainability and science as preconditions for incorporating traditional Chinese medicine into its compendium.

"All medicinal treatment should be on the principle of 'do no harm' to those using, or making it and to the species it depends on; meaning in most cases no vertebrate should be used within TCM,"Mr Zhou said, referring to traditional Chinese medicine.

Inclusion in the compendium did not mean the WHO endorsed the scientific validity of traditional medicine, or that it recommended or condoned the use of animal parts, a WHO spokesman Tarik Jašarevic said.

"WHO recommends the enforcement of the Convention on International Trade in Endangered Species of Wild Fauna and Flora, which protects rhinos, tigers, and other species," he said.

While Hong Kong does not typically manufacture traditional Chinese medicine products, it imports them from the mainland and a wide array, including pangolin scales, saiga horn and shark fin, are readily available in the city's Western district.

Hong Kong lawmaker Elizabeth Quat said preventing the use of endangered animals in traditional Chinese medicine must happen in the mainland.

"The Chinese government should do something. Manufacturing is mostly in China. The government needs to stop the production of it," she said.

In online Chinese forums, customers can buy everything from African rhino horn to live young pangolins, also known as scaly anteaters, and the powdered horn of saiga, an endangered type of antelope found in Europe and Asia.

While the use of rhino horn is officially banned in China, pangolin and saiga products are legally used in Chinese medicine with the big traditional medicine companies all producing them.

Companies including Kangmei Pharmaceutical and Tong Ren Tang have been given permits by local government bodies to produce medicines with pangolin scales and saiga horns, according to corporate filings.

Gui Zhen Tang, which owns the biggest moon bear breeding centre in southern China, has permits for extracting bear bile, according to its website.

China Traditional Medicine Holdings last year acquired Beijing Huamiao, a company it says holds permits for the "processed products of some of the endangered and protected wild animals". It did not elaborate.

None of the companies responded to multiple requests for comment.

China's State Forestry and Grassland Administration and the State Administration of Traditional Chinese Medicine did not respond to requests to comment.

Hong Kong's Health department said the city's Chinese Medicines Board "has always been concerned about the balance between the protection of endangered species and the use of traditional Chinese medicine," and it would continue to observe international regulatory trends and monitor the issue with regard to endangered species.

Farming of animals used in traditional medicine has been advocated by China's Forestry administration and some breeders as a sustainable way to use endangered animals in traditional Chinese medicine.

However, activists say the use of farmed supplies of animals such as tigers and rhinos risks enabling the laundering of wild animal parts.

Many treatments have already substituted herbal products for animal parts, and practitioners say herbal alternatives are just as, if not more effective.

Mr Lixing Lao, director at the School of Chinese Medicine at the University of Hong Kong, said there was no need to use endangered species.

"Chinese medicine is part of the world," Mr Lao said. "We take care of the human health, the animals. If we use endangered species, it damages our reputation."