What would your first instinct be when an earthquake strikes?

While most of us would probably take cover under a desk, Chinese TV news anchor, He Kunyu, evidently felt the show must go on.

Footage of the incident leaked online showed He in the middle of a broadcast when the earthquake hits, causing tremors which rock the studio. He then tells camera crew behind the shaky lens: "Don't panic, don't panic, let's continue".

According to People's Daily China, a 5.1 magnitude earthquake striked the city of Xichang in Sichuan province on October 31.

His professional attitude and cool demeanour in the face of the natural disaster gained widespread attention online, as netizens hailed him the 'calmest news anchor'.

Others even joked that perhaps the tremor was not a big deal to him as earthquakes frequently occur in Sichuan. Some quoted a Sichuan saying, which goes: "No need to panic during small quakes, and you can’t outrun a big one [anyway]". 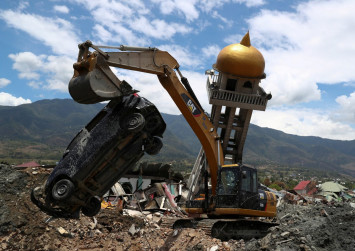 In an interview with Beijing News, He eventually admitted that he did not feel tremors from the quake which was why he didn't panic. He added that the viral clip was cut off and did not show everyone abandoning their stations five seconds later when a stronger shockwave hits.

While no one was hurt in the earthquake, the anchor later issued an apology, chastising his actions and advising others to always take proper safety measures during an earthquake.