A medical worker administers a dose of a coronavirus disease (Covid-19) vaccine to a child in Huzhou, Zhejiang province, China on Oct 26, 2021.

BEIJING - China has reported nearly 250 locally transmitted cases of Covid-19 since the start of the current outbreak 10 days ago, with many infections in remote towns along porous international borders in the country's northwest.

The overall number is tiny versus many clusters outside the country. It is also modest compared with more than 1,200 local cases reported during China's July-August outbreak and the more than 2,000 cases in January during the last winter.

However, the steady increase of cases in the past week and their geographical spread alarmed local authorities and prompted the return of complex sets of restrictions on travel as well as on the tourism and catering sectors.

China has said the Covid-19 pandemic is the biggest challenge to its hosting of the Winter Olympics in February. Officials suspected the current flare-up was caused by a virus source from overseas.

Richer cities such as Beijing have managed to keep infection numbers low by quickly quarantining and testing potential cases.

But small border towns, battling a higher risk of infections imported from overseas while equipped with relatively few resources, have suffered more severe and prolonged disruptions amid China's zero tolerance for Covid-19.

Prior to Covid-19, Ejina Banner, a remote administrative division on China's border with Mongolia, saw 8 million visitors in 2019 thanks to attractions such as a drought-resistant forest that would turn a golden yellow in October.

But the settlement of 36,000 residents has been hard hit in the latest outbreak. Ejina has gone into a lockdown since last week, rendering nearly 10,000 tourists unable to leave, a local official said on Tuesday. Nearly half of those visitors are aged over 60. 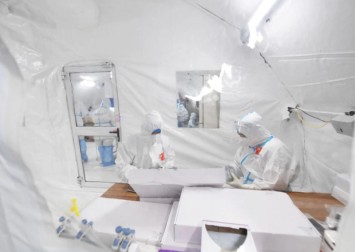 "Because Ejina is large but sparsely populated, it's hard for it to seal its border," Fan said.

Ruili in the southwestern province of Yunnan, rocked by multiple domestic outbreaks this year, has been served with the toughest curbs ever seen in China.

People who want to leave the city, except for those leaving for a few essential reasons, must be quarantined at centralised facilities for at least seven days before departure, Ruili said on Wednesday.

Ruili is a key transit point for Yunnan, which has fought to monitor its rugged 4,000 km border with Laos, Myanmar and Vietnam for illegal immigration amid unauthorised crossings by those seeking a haven from the pandemic.