With the ongoing global pandemic, you can never be too careful. Or can you?

In an article published on Monday (May 11), Wuhan Central Hospital cautioned against wearing a mask while exercising after treating a jogger who suffered a collapsed lung on his run.

The 26-year-old man, who didn't have the habit of exercising, started going on runs half a month ago to keep healthy.

Despite finding it difficult to breathe while jogging on May 7, he kept his mask on to protect himself from the possibility of contracting Covid-19.

Four kilometres into his run, he felt a dull ache in his chest and found himself breathing harder than usual. Though he tried to carry on, the discomfort made him give up on the jog.

The young man got home, however, he did not feel better. His symptoms did not subside and the pain intensified as he struggled to breathe.

His family rushed him to the hospital.

Upon examination, doctors discovered that the jogger's left lung had collapsed. It was compressed by 90 per cent, and caused his heart to shift to the right. Had the jogger sought treatment any later, he would have died. 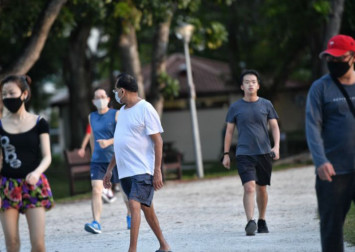 Fortunately, the emergency surgery was a success and the man is now in stable condition.

While elderly folks were more susceptible to the sudden onset of a collapsed lung, the director of the thoracic surgery department related the jogger's incident to his build.

According to him, those who are tall and thin tend to have lungs that are not as well developed as the others. Should they suddenly engage in strenuous exercise, the sudden pressure in the lungs could lead to a rupture.

Dr Leong Hoe Nam, an infectious diseases expert who practises at Mount Elizabeth Novena Hospital, told AsiaOne that "there would probably be other reasons" for the man's collapsed lung.

He added that he would be more concerned about the mask triggering a heart attack.

Although wearing a mask while outdoors is now mandatory in Singapore, exceptions have been made to allow people to go mask-free while engaging in vigorous exercises such as running.