A Chinese man found himself in hot water after he was caught slipping a dead rat into his soup, in a ploy to extort 5 million yuan (S$1 million) from hot pot restaurant chain Haidilao.

In a report by Shanghaiist, the man surnamed Guo, went to a Haidilao outlet in Beijing with his wife.

While he was eating, the man claimed to have found a cooked rat in the broth and called over a waiter to report his discovery.

The couple rejected meal coupons the restaurant offered for the inconvenience caused. Even when a worker offered the couple a 20,000 yuan (S$4,000) compensation, Guo was not satisfied.

Instead, he demanded the restaurant compensate him five million yuan.

Due to his excessive demands, the two parties could not come to an agreement and Guo escalated his complaint to the food and drug administration. According to Chinese media, the administration turned him away. 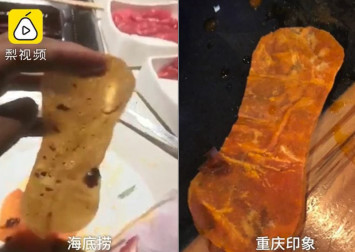 On the other hand, Haidilao reported the case to the police, citing a case of extortion from a customer.

After an official investigation, the police arrested Guo on grounds of extortion. It was revealed that he had kept a dead rat he found while visiting his hometown in Henan, and carried the carcass back to Beijing in a bottle.

He intended to get a free meal from the restaurant by reporting his 'find' in his hot pot but admitted that greed got the best of him.

Guo's lawyer claimed he did not intend to extort the restaurant and said that Guo had paid his 300 yuan bill and even compensated Haidilao an extra 2,400 yuan for their losses.

On March 19, the man admitted to his mistake in court and pleaded with the judges to give him a chance to turn over a new leaf.

#Food hygiene/safety #Steamboat & Hotpot #In Case You Missed It