According to Murphy's Law, anything that can go wrong, will go wrong.

And it seems to be the case for a group of Chinese students after they missed part of an important national examination when the lift they were in malfunctioned.

Trapped in a hotel elevator for 40 minutes, six students from Shandong were unable to sit the English paper at the National College Entrance Examination (NCEE).

The NCEE, also known as Gaokao, is one of the most important exams in China as it is believed to determine the career path of an individual.

The incident took place on the afternoon of June 8, in a branch of the hotel chain City 188.

Read Also
Peace and quiet requested for gaokao in China 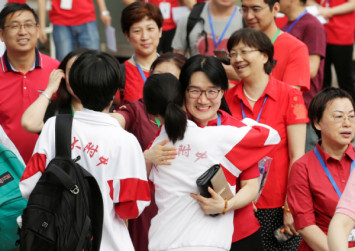 It is understood that the six students did not live near the examination centre, hence they stayed at a nearby hotel to take the exams.

Students had to show up at the centre, which was around 800m away, by 2.45pm to do the English portion of the paper.

At around 2.15pm, the students stepped into the faulty lift and became trapped inside.

Though they begged hotel staff to call for emergency help, the staff assured them that the elevator would be back to normal within 10 minutes.

More than 15 minutes passed and the situation did not show any signs of improvement. After hotel staff called the police, the students were out of the elevator within minutes.

By then it was too late, the time was 2.55pm when they arrived at the exam venue. According to the rules, exam officials could not let the latecomers in to join the other candidates.

Missing the exam was a life-changing mistake to the students, as one shared that he was only left with this paper to take, before he could enter a university.

Another shared, "This was supposed to be a turning point in our lives. Things were looking up but everything is ruined now."

Now, the students are left with no choice but to retake the exams next year and must repeat a whole year of school to prepare for it.

#china #Students #Education and Schools #In Case You Missed It