If you're guilty of not removing your makeup before flopping into bed, it's time you grab those cleansing oils and give your face a good scrub.

Liu, a 32-year-old woman from Hubei, China, had been experiencing dry, itchy eyes for the past six months. She noticed that her eyelashes would frequently fall off too. Unable to stand the itch any more, she finally made a trip to the hospital.

To her horror, the cause for her ailment turned out to be a nest of mites living under her eyelashes.

According to Liu's doctor, many of the mites were still moving about when observed under a microscope. Liu herself had a big shock when he showed her photos of the mites.

As to how the mites got there, her doctor likened it to her job's dress code as she had to put makeup on every day.

Coupled with her hectic work schedule and limited time to rest, Liu wasn't very thorough in removing her makeup, sometimes neglecting to remove it altogether.

Over time, the buildup of dead skin and dirt made her eyelashes the perfect breeding ground for mites.

These mites, known as Demodex folliculorum mites, are a type of parasite that lives on humans. While they are generally harmless, larger numbers of such mites can cause a multitude of unwanted skin problems, according to MedicalNewsToday. 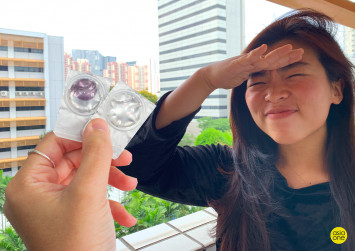 Mites are particularly active in summer due to the warm weather. They breed rapidly during this period — one eyelash alone could be home to 36 mites.

To reduce the likelihood of mites breeding to an abnormally large amount, the doctor advised Liu as well as other women to thoroughly remove their makeup.

ALSO READ: Hubei woman has over 100 mites in eyelashes after not washing pillow case for 5 years

#Lifestyle #Makeup #Public health and hygiene #In Case You Missed It