To prove that the toilets were clean, a deputy general manager and workers from a company in the province of Fujian, China, ate muah chee, or glutinous rice balls, prepared in the urinals.

A footage of the incident was leaked online and went viral. Many Chinese netizens criticised the boss for being "mentally retarded", fostering an abhorrent culture where subordinates are forced to "play along" with the boss's whims just to keep their jobs.

During an event by the food company on Monday (July 16), a deputy general manager in the company placed the muah chee and sauce into the urinal, before mixing the two, reports Shin Min Daily News.

She then told the workers:

"I did a count just now. I think I flipped the balls about 20 times or so. 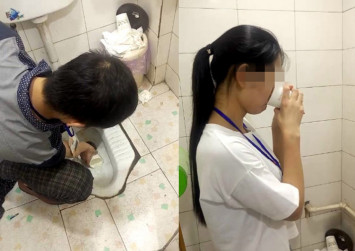 "Take a look everyone, I will be the first one to eat."

After that, she reached into the urinal, took one of the rice balls and placed it in her mouth. The workers subsequently followed suit.

The event did not end with the rice balls, and the group proceeded to have a meal in the toilet.

In the video, the workers had nothing but praises for the rice balls, saying that they were "very delicious and fragrant".

The deputy manager also claimed that the entire event was a 25-year-long company tradition.

Despite the positive responses from the workers, many netizens have expressed disgust.

A lead cleaner in the company told reporters that the toilets are clean enough to eat from, given that she rinses them with a lot of clean water.

"Don't they find it disgusting? I will never eat that."

"Which company is this? I will never buy anything from them again."

A netizen also aptly pointed out:

"There are 1,000 methods to prove that the toilets are clean, but they had to choose the most stupid one."