This photo taken on Feb 17, 2020, shows a man (left) using a laptop at an exhibition centre converted into a hospital in Wuhan in China's central Hubei province.

Mainland China had 397 new confirmed cases of coronavirus infections on Friday, the country’s National Health Commission said on Saturday (Feb 22), down from 889 cases a day earlier.

The central province of Hubei, the epicentre of the outbreak, reported 109 new deaths, while in the provincial capital of Wuhan, 90 people died.

The coronavirus has infected hundreds of people in Chinese prisons, authorities said on Friday, as cases jumped beyond the epicentre in Hubei province, including 100 more in South Korea and a worsening outbreak in Italy. 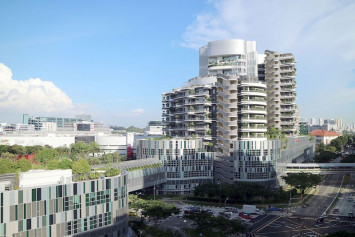 A total of 234 infections among Chinese prisoners outside Hubei ended 16 straight days of declines in new mainland cases. Another 271 cases were reported in prisons in Hubei - where the virus first emerged in December in its now locked-down capital, Wuhan.

State television quoted Communist Party rulers as saying the outbreak had not yet peaked amid a jump in cases in a hospital in Beijing. Total cases of the new coronavirus in the Chinese capital neared 400 with four deaths.

Meanwhile, the World Health Organisation (WHO) warned on Friday that the window of opportunity to contain wider international spread of the epidemic of the new coronavirus disease is closing, after cases were reported in Iran and Lebanon.

Asked whether the outbreak is at a "tipping point" after new cases and deaths in Iran from Covid-19, and cases in Lebanon and Canada, WHO director-general Tedros Adhanom Ghebreyesus said that he still believed the virus spread could be stopped.

"Although the window of opportunity is narrowing to contain the outbreak, we still have a chance to contain it," he said.

"If we don't, if we squander the opportunity, then there will be a serious problem on our hands," he said.

South Korea is the latest hot spot with 100 new cases doubling its total to 204, most in Daegu, a city of 2.5 million, where scores were infected in what authorities called a "super-spreading event" at a church, traced to an infected 61-year-old woman who attended services.

In Italy, an elderly man in the northern city of Padua has died after being infected with the coronavirus, becoming the first Italian victim of the disease.

Health authorities announced earlier in the day 15 cases of the virus in the wealthy northern region of Lombardy and two in neighbouring Veneto where Padua is located - the first known cases of local transmission in the country. None of those infected were believed to have travelled to China.

Twenty-six other countries have reported 1,151 cases and eight deaths.