BEIJING - China said Monday (Feb 3) it "urgently needs" protective medical equipment as the death toll in the country from a highly contagious coronavirus passed that of the 2002-2003 Sars crisis, with more than 17,000 infected.

Fears of the virus have spurred people in the densely-populated country of 1.4 billion to stock up on single-use surgical masks, while front-line medical personnel at the centre of the outbreak have reported equipment shortages.

At full capacity, China's factories are only able to produce around 20 million masks a day, according to the ministry of industry.

Mr Tian Yulong of the industry ministry said earlier on Monday that the authorities were taking steps to bring in masks from Europe, Japan and the US, adding that supply and demand in China remained in "tight equilibrium" as factories returned to production after the Chinese New Year lull.

He said they were now operating at "between 60 and 70 per cent capacity".

In addition to Hubei, the province of more than 50 million people at the centre of the outbreak, several other provinces and cities across China have made it compulsory to wear masks in public as virus fears have grown. 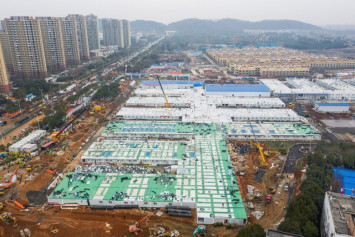 These include Guangdong - China's most populous province - plus Sichuan, Jiangxi, Liaoning and the city of Nanjing, with a combined population of more than 300 million.

The Chinese foreign ministry on Monday also said the United States has acted to create and spread fear amid the outbreak, instead of offering any significant assistance.

The US was the first nation to suggest partial withdrawal of its embassy staff, and the first to impose a travel ban on Chinese travellers, said the ministry's Ms Hua.

"All it has done could only create and spread fear, which is a bad example," she told an online news briefing, adding that China hoped countries would make judgements and responses that were reasonable, calm and based on science.

The US began evacuating its citizens from the central Chinese city of Wuhan, where the virus is believed to have first emerged late last year, on Jan 28. The World Health Organisation on Jan 30 declared the accelerating outbreak a global emergency.

On the same day, the US State Department raised its travel advisory for China.

“It is precisely developed countries like the United States with strong epidemic prevention capabilities and facilities that have taken the lead in imposing excessive restrictions contrary to WHO recommendations,” Ms Hua said.

The death toll from the coronavirus soared past 360 on Monday, exceeding the 349 mainland fatalities from the 2002-03 Sars outbreak, although Sars killed a higher percentage of people infected.