A doctor looks at a lung CT image while making his rounds at a quarantine zone in Wuhan.

BEIJING - The number of confirmed deaths from China’s coronavirus outbreak rose to at least 490, after authorities in Hubei province reported 65 new fatalities on Wednesday (Feb 5).

In its daily update, figures from the health commission in Hubei, which has been hit hardest by the virus, also showed a jump in confirmed infections with 3,156 new cases, taking the total in the province to 16,678. The death toll in the province is now 479.

That puts the national total at more than 24,324, based on numbers previously issued by the central government.

In Hubei's capital city of Wuhan, where the virus first originated, a total of 362 people have now died from the virus.New confirmed cases in Wuhan surged by 1,967 on Tuesday, up from 1,242 on Monday.

The city is converting an additional eight buildings, including gymnasiums, exhibition centres and sports centres, into hospitals, the official Xinhua news agency reported on Wednesday.

The latest announcement adds to plans revealed earlier this week to convert three other venues into hospitals.

Once all 11 buildings are converted, a process that is expected to be completed later on Wednesday, they will be able to accommodate 10,000 patients.

A specially constructed hospital in Wuhan, designed with 1,000 beds, opened to patients on Monday, while the building of a second hospital, with 1,600 beds, is also scheduled to be completed on Wednesday. 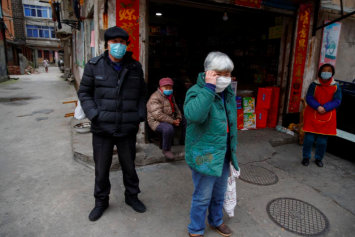 The coronavirus epidemic, which has spiralled into a global health emergency, is believed to have emerged in December from a market that sold wild game in Hubei’s capital Wuhan.  Cases have now been reported in more than 20 countries.

Highlighting the concern about infections spreading in other densely-populated Chinese metropolitan areas, authorities in three cities in eastern Zhejiang province – including one near Shanghai – placed restrictions on the number of people allowed to leave their homes.

On Tuesday, Hong Kong reported its first death from the disease, as the semi-autonomous city closed all but two land crossings with the Chinese mainland.

The World Health Organisation (WHO) has declared the flu-like virus a global emergency, and experts say much is still unknown, including its mortality rate and transmission routes.

WHO chief Tedros Adhanom Ghebreyesus on Tuesday urged all health ministers to improve data-sharing on coronavirus immediately and said he would send a team of international experts to work with Chinese counterparts.

The UN agency was sending masks, gloves, respirators and nearly 18,000 isolation gowns from its warehouses to some two dozen countries that need support, WHO director-general old its Executive Board.

So far 22 nations have reported trade or travel-related measures linked to the coronavirus, which Mr Tedros said should be"short in duration, proportionate to public health risks" and reviewed regularly.