BEIJING - The number of confirmed deaths in China from the new-coronavirus outbreak rose on Friday (Feb 7) to at least 630 after hard-hit Hubei province reported 69 new fatalities.

In its daily update, Hubei’s health commission also confirmed another 2,447 new cases in the province, where the epidemic originated.

The number of deaths in China's central Hubei province from the outbreak had risen by 69 to 618 as of Thursday, Chinese state television reported on Friday.

There had been a further 2,447 cases detected in Hubei, the epicentre of the outbreak, taking the total in the province to 22,112.

Most of the new deaths were in Hubei’s provincial capital of Wuhan, where the virus is believed to have originated.

Wuhan reported 64 new deaths on Thursday, up from 52 on Wednesday. A total of 478 people in Wuhan have now died from the virus.  New confirmed cases in Wuhan increased by 1,501 on Thursday.

The latest toll came soon after the confirmation of the death of a Chinese doctor who tried to warn the world about the new coronavirus.

Li Wenliang, 34, was an ophthalmologist at a hospital in Wuhan, the city hardest hit by the outbreak. He and seven others were reprimanded by Wuhan police last month for spreading“illegal and false” information about the coronavirus. 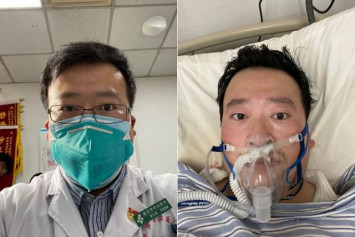 Li had told a group of doctors on Chinese social media about seven cases he saw and posted a picture of a test result in an effort to help other doctors.

Meanwhile, the World Health Organisation (WHO) said on Thursday (Feb 6) it was too early to say that China's coronavirus outbreak was peaking, but noted that the country had recorded its first day of a drop in the number of new infections.

Dr Mike Ryan, WHO's top emergencies expert, said it was very difficult to make predictions on the course of the disease first reported in the central city of Wuhan in late December, noting: "We are still in the middle of an intense outbreak."

"There are cycles of transmission, and we may see those cases increase in the coming days. But at least for the moment, things are stable," Ryan told a news conference.

"But 4,000 cases or nearly, 3,700 coronavirus cases confirmed in a single day, is nothing to celebrate and is certainly still a great worry," he said.