WUHAN - The death toll from China's new coronavirus epidemic surged past 1,500 on Saturday (Feb 15) after 139 more people died in Hubei province, the epicentre of the outbreak.

The province's health commission also reported 2,420 new cases of the Covid-19 strain, about half the number from the previous day, taking the total in the province to 54,406.

Including the latest numbers from Hubei, the total number of cases in mainland China now exceeds 66,000, with more than 1,500 deaths.

The Chinese capital Beijing on Friday imposed a 14-day self-quarantine on people returning to the city from holidays to prevent the spread of the new coronavirus, and threatened to punish those who failed to comply.

It was not immediately clear how the restriction, relayed by the official Beijing Daily newspaper, would be enforced, or whether it would apply to non-residents of Beijing or foreigners arriving from abroad.

China is struggling to get its economy going after the annual Chinese New Year holiday, which was extended for 10 days to help contain the outbreak of the new and highly contagious respiratory virus.

A top Chinese official, in an interview with Reuters, acknowledged that coronavirus was a deep challenge, but defended Beijing’s management of the epidemic and lashed out at the “overreaction” of some other countries.

State Councillor Wang Yi, who also serves as China’s foreign minister, said China has taken the most rigorous and decisive measures to fight the epidemic, with many efforts going beyond international health regulations and World Health Organisation (WHO) recommendations.

“Through our efforts the epidemic is overall under control,” he said.

A WHO-led joint mission with China will start its outbreak investigation work this weekend, focusing on how the new coronavirus is spreading and its severity, its chief Tedros Adhanom Ghebreyesus said. 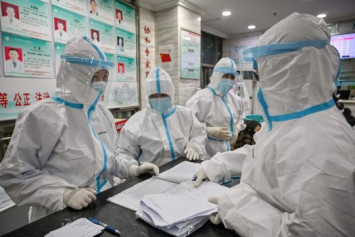 The mission will also seek more details on how, where and when the more than 1,700 healthworkers infected contracted the new virus, WHO officials said.

The scale of the epidemic swelled this week after authorities in Hubei changed their criteria for counting cases, adding thousands of new patients to their tally.  Cases “clinically diagnosed” through lung imaging are now counted in addition to those that have shown up positive in laboratory tests.

The revision added nearly 15,000 patients to Hubei’s tally on Thursday, with the WHO noting that cases going back weeks were retroactively counted.

Authorities said 1,716 medical workers have been infected during the outbreak, with six dying from the illness.  Most of the infections among health workers were in Hubei’s capital, Wuhan, where many have lacked proper masks and gear to protect themselves in hospitals dealing with a deluge of patients.

The grim figures come a week after grief and public anger erupted over the death of a whistleblowing doctor who had been reprimanded and silenced by police in Wuhan after raising the alarm about the virus in December.