A worker takes the body temperature measurement of a man at the entrance to a residential compound following an outbreak of the new coronavirus in Wuhan, on Feb 1. 2020.

BEIJING - The number of confirmed deaths from the coronavirus outbreak spiked to 425, after authorities in China's Hubei province reported 64 new fatalities on Tuesday (Feb 4).

In its daily update, figures from the health commission in Hubei, which has been hit hardest by the virus, also showed a sharp increase in confirmed infections with 2,345 new cases.

Across China, there were 3,235 new confirmed infections on Monday, bringing the total number so far to 20,438.

The updates take the number of deaths in Hubei, the epicentre of the outbreak, to 414 as of Monday. The total number of infections in the province has risen to 13,522.

The Chinese government has said it “urgently” needs surgical masks, protective suits, and safety goggles as it battles to control the outbreak. 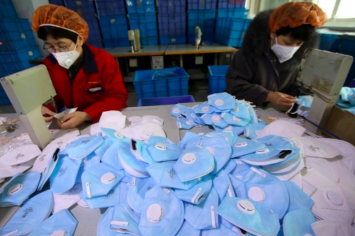 Meanwhile, China has agreed to allow US health experts into the country as part of a World Health Organisation (WHO) effort to help fight the fast-spreading coronavirus, even as it accused the United States on Monday of whipping up panic over the disease with travel restrictions and evacuations.

“China has accepted the United States’ offer to incorporate a group of experts into a World Health Organization mission to China to learn more about and combat the virus,” White House spokesman Judd Deere said.

China accused the United States of spreading fear by pulling its citizens out and restricting travel.

"Washington has unceasingly manufactured and spread panic,” Foreign Ministry spokeswoman Hua Chunying told reporters, noting that the WHO had advised against trade and travel curbs.

“It is precisely developed countries like the United States with strong epidemic prevention capabilities and facilities that have taken the lead in imposing excessive restrictions contrary to WHO recommendations,” she said.

The WHO last week declared the flu-like virus a global emergency. It has spread to 23 other countries and regions. The Philippines has reported one death from the coronavirus, the first outside of China.

Airlines around the world have stopped flights to parts of China. A suspension by the United Arab Emirates on Monday will affect the Gulf airlines Etihad and Emirates.