Couple in China offers to give away daughter to save son with leukaemia, has crowdfunding efforts frozen

The boy, nicknamed Chengcheng, was diagnosed with acute leukaemia in July. His parents need 560,000 yuan (S$111,848) for his treatment and offered to give their daughter away in exchange for the money.

A Chinese couple has come under fire and had their crowdfunding efforts frozen after they offered to give their daughter away in exchange for medical fees to save their leukaemia-stricken son.

The couple, Liang Yujia and Chen Lanqin, are from China's Sichuan province. They have a pair of twins, aged four. The boy, nicknamed Chengcheng, was diagnosed with acute leukaemia in July.

A photo of Mr Liang holding his daughter and displaying a sign with the words, "Giving daughter away to save our son" went viral on the Chinese Internet last week, enraging netizens.

The sign said that to treat their son the couple would need 560,000 yuan (S$111,848) and they have already spent 50,000 yuan so far. It added that their daughter is "lively and cute" but that they are unable to provide a good life for her and were offering to give her away in exchange for money to save their son.

Netizens were up in arms after the photo surfaced, calling out the parents for their gender discrimination, saying that their actions were "illegal", deeming it as a form of human trafficking.

Crowdfunding efforts for the boy, which have been taking place on the country's numerous crowdfunding platforms - Aixinchou, Shuidichou and Chunyuchou - were also frozen.

On Aug 10, Aixinchou posted a statement on their official Weibo account saying that the couple have managed to raise over 50,000 yuan since posting a request on their site on July 12 and that they have looked into the incident.

It confirmed Chengcheng's illness and said: "We understand (the father's) anxious desire to save his son but the negative consequences caused by such actions are incalculable."

The site added that it will ensure that donations for the couple will only be used for treating Chengcheng.

On Thursday, the South China Morning Post reported that the site was giving the money directly to the hospital treating Chengcheng instead of directing funds to the family. The parents have since apologised.

Chengcheng's mother, Madam Chen, told the Beijing Youth Daily that the family never intended to give away their daughter. She added that the proceeds from their crowdfunding on Shuidichou, which amounts to around 39,000 yuan, have been frozen, while Chunyuchou only raised about 1,000 yuan.

She told the paper: "We will not give her away, of course not, not to anyone. People have asked us how much it will cost or asked to adopt her but we have refused it all." 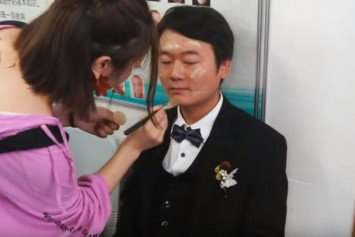 Her husband, Mr Liang, also explained in a video interview with The Beijing News that the sign was a gimmick. "I wanted to attract society's attention to raise money, which is why I (displayed the sign)."

"We now know that it was inappropriate and not properly considered," Madam Chen added.

The family manages to earn about 7,000 yuan per month but that is not enough for Chengcheng's treatments, she said. After they displayed the sign, donations to Chengcheng increased, with more people giving them mobile payments over Wechat, but their account was quickly frozen after complaints over the sign surfaced, the couple said.

The Beijing News reported that the family is now considering selling their house for his treatment fees.