Chinese authorities are trying to lure back fugitive fraudsters operating across the border in Myanmar.

BEIJING  - Chinese authorities are trying to lure back fugitive fraudsters operating across the border in Myanmar by threatening to cut off pensions and other benefits for family members, according to social media postings by public security bodies.

Since a Feb 1 coup in Myanmar, economic collapse and lawlessness have created conditions for an upsurge in criminal activity, particularly in northern border areas and by Chinese gangs, according to a report from the United States Institute of Peace.

Large-scale criminal groups have long operated in the region, much of it outside the control of the military junta, using it as a base for well-organised telecoms and Internet fraud scams, as well as hosting illegal casinos.

The actions by local authorities come after China's President Xi Jinping said in April that China will resolutely crack down on telecoms and Internet fraud.

According to notices from Chinese public security departments in at least five counties early this month, suspects in Myanmar face losing their household registration permit - a key document linked to residence and access to public services - if they do not turn themselves in, and would be unable to return to China.

One county in Jiangxi province said it would seek to suspend pensions and medical coverage for the immediate relatives of 33 suspects, giving the names and addresses of the suspects. The notice was later deleted from WeChat.

A county in Hunan province said social welfare guarantees for family members of suspects would be cancelled, while houses built using illicit funds would be destroyed and the people residing there would be expelled.

The official People's Daily WeChat account reposted one of the notices.

China's foreign ministry did not immediately respond to a request for comment.

Read Also
Unlike the Myanmar coup, some takeovers in Chinese history were welcomed 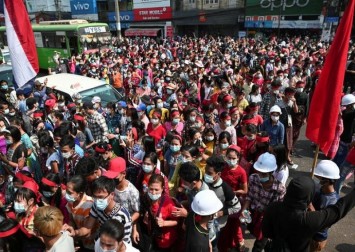 Much of northern Myanmar, where most of the notices said suspects were located, is under the control of militias, some of which are opposed to the military that seized power in a coup in February, while others support it or have remained neutral.

"In the two months since the military re-established its tumultuous rule, criminal activities in Myanmar have widened dramatically, posing new challenges to the region's efforts and ability to control cross-border crime," the US Institute of Peace, a US-government funded non-partisan institute, said in its April report.

Large tracts of northern Myanmar are also part of the Golden Triangle illicit drug-producing region, while areas in the north and north-east that border China and Thailand have a proliferation of illegal casinos that law enforcement authorities say are used for money laundering.

A television show released in China this year dramatised efforts by the country's police to fight transnational crimes - including telecoms fraud, committed by or against Chinese nationals abroad. One South-east Asian region called "Country M" featured in the drama.

In one 2019 telecoms fraud case involving 10 million yuan (S$2 million in today's rates), Chinese police cooperated with their counterparts in northern Myanmar to bring back 69 Chinese nationals, according to the state-backed China Daily.

Security experts fear that the collapsing economy and increased fighting between ethnic militias and the Myanmar military in the wake of the coup will see a surge in illicit activity to finance armed groups. The lure of vice will also be strong for those who have lost their jobs or businesses, they add.