China said on Wednesday (April 20) the black boxes of a Boeing 737-800 jet that crashed last month were badly damaged, leaving virtually no publicly available clues to explain its violent plunge into a wooded hillside, killing all 132 people on board.

China Eastern flight MU5735 from Kunming to Guangzhou plunged from cruising altitude into the mountains of Guangxi on March 21 in China's first fatal air crash since 2010.

Summarising its preliminary crash report, the Civil Aviation Administration of China did not include any information from the cockpit voice and data recorders, which had been sent to Washington for analysis.

"The two recorders on the plane were severely damaged due to the impact, and the data restoration and analysis work is still in progress," CAAC said in a statement.

CAAC gave no indication of the focus of its probe. Most accidents are caused by a mix of technical and human factors.

But it ruled out a number of risks, saying the crew were qualified, the jet was properly maintained, the weather was fine and no dangerous goods were onboard.

In a potentially key finding, it said most of the wreckage was concentrated in one area.

Safety analysts said that would not typically happen in the event of a catastrophic mid-air break-up or explosion, but did not rule out parts being torn off in the dive after CAAC said part of one wingtip was found 12 km (8 miles) away.

"Two questions you'd have to look at: did that piece coming off cause the dive or did the dive cause that piece to go off," said Anthony Brickhouse, an air safety expert at Embry-Riddle Aeronautical University.

Chinese aviation expert Li Xiaojin said in the absence of other findings, data from black boxes was vital. It could take at least a year for the investigation to be concluded, he added.

"These boxes are designed to be really, really robust," Brickhouse said. "I really can't think of an accident in recent history where we found the boxes and we didn't get information from them."

The 737-800 is a predecessor to the 737 MAX, which has not resumed commercial service in China more than three years after two fatal crashes.

But China Eastern, which grounded its entire fleet of 223 737-800 planes after the crash, resumed those commercial flights on Sunday, effectively ruling out any immediate new safety concern over Boeing's previous and still most widely used model.

A US official noted that no safety bulletins or other advisories had been issued by Boeing in the wake of the crash. 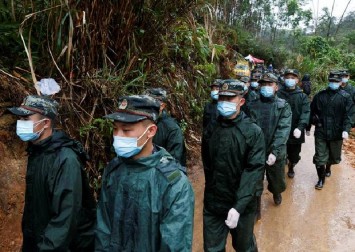 In its summary, CAAC did not point to any technical recommendations on the 737-800, which has been in service since 1997 with a strong safety record, according to experts. It does not have the cockpit system at the centre of the MAX crisis.

Boeing shares closed 1.3 per cent lower on Wednesday. Boeing declined to comment on the CAAC statement but said it would continue to support the crash investigation.

The Chinese agency said it had completed the preliminary report within the limit of 30 days. Such reports are usually made public, though they do not have to be under global rules.

China does not have a tradition of publishing widely accessible accident reports, but the statement marks a step towards transparency that has been credited with making flying safer worldwide, Paul Hayes, director of safety at UK-based Ascend by Cirium, said.

CAAC said the last normal call from controllers to the plane was at 2:16 pm local time while it was cruising at 29,200 feet, less than six minutes before the plane disappeared from radar.

Brickhouse said it had appeared the flight was progressing normally and communications were normal.

"And then all of a sudden, the aircraft wasn't communicating and that's when it started diving."