People ride on a front loader as they make their way through a flooded road following heavy rainfall in Zhengzhou, Henan province, China July 23, 2021.

As floodwaters began to recede, rescuers in the city of 12 million used digger trucks, inflatable boats and makeshift rafts to transport some residents to dry land and deliver provisions to others in high-rise apartment blocks.

Zhengzhou, the capital of populous Henan province, has borne the brunt of extreme wet weather in central China this week, receiving the equivalent of a year's worth of rain in just a few days.

The resulting severe flooding killed 12 people who were trapped in the city's subway system. It also downed power supplies and stranded residents at home, in offices and on public transport.

Some of the rescuers are volunteers using makeshift means like the digger trucks deployed by local construction companies.

One of the volunteers, Li Kui, 34, said the demand for basic goods and foods was immense.

"We start our day at 8 a.m. and go on until 2 a.m. Besides having lunch and using the bathroom, we just go up and down the streets all day," Li said.

Asked if he was exhausted, Li said: "Yes, but compared to the people trapped inside, they must be feeling worse."

In other areas of the city where the floodwaters had subsided, municipal workers started the clean-up, sweeping away tree branches and clearing up other debris like marooned bicycles and scooters.

Tens of thousands of rescue workers, including the military, have been deployed across Henan.

The death toll in Henan currently stands at 56, with five people still missing, according to state media.

Rescue professionals from neighbouring provinces have been called in, along with specialised vehicles to drain waterlogged streets, intersections and underground road tunnels.

While the rains in Zhengzhou had eased to a light drizzle, other parts of Henan were still forecast to receive heavy rain on Friday, according to weather reports.

In Xinxiang, a city north of Zhengzhou, 29 of 30 reservoirs were overflowing, a situation the local water conservancy bureau described as "grim".

For rescuers, the task was sometimes upsetting. Local media reported that a three-to-four-old infant was pulled from a collapsed home just outside Zhengzhou earlier this week, with the body of the child's mother found a day later. 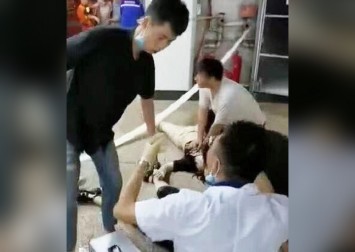 Zhou Xiaozhong, 33, a digger truck driver from nearby Kaifeng city, picked up a mother and her two young children.

"She was crying," said Zhou, a father of three. "I too felt like crying."

The devastation and loss of life has sparked public criticism of the slow reaction of Zhengzhou's subway operator, prompting the Chinese government to order local authorities to immediately improve urban transit flood controls and emergency responses.

The provincial weather bureau also came under fire for a lack of warning, despite saying said it had issued a forecast two days before the rains arrived.

A document created by an anonymous user on a Google Docs-like platform owned by tech giant Tencent for people to share real-time information on the flooding in Henan had been accessed more than 6 million times by Friday.