HONG KONG - Hong Kong residents snapped up last-edition copies of the final edition of pro-democracy newspaper Apple Daily on Thursday (June 24) after it was forced to end a 26-year run amid a national security crackdown that froze the company's funds.

Apple Daily, owned by staunch Beijing critic Jimmy Lai, who is in jail, is an unapologetic tabloid that mixes pro-democracy discourse with celebrity gossip and investigations of those in power. It has been a thorn in Beijing's side for years.

Emotions ran high as supporters of the paper, which has faced an unrelenting squeeze since tycoon Lai was arrested under the security law in August 2020, queued for their last copies of the popular newspaper just after midnight.

"I couldn't sleep well for the past few nights," said Tse, 60, a former medical worker, who leaned on a cart to support herself as she queued outside a newspaper vendor in the working class district of Mong Kok.

"I hope the reporters can stay true to their faith and keep working hard."

Queues stretched at newsstands across the city after an emotional final print run at the paper's headquarters.

"Thank you to all readers, subscribers, ad clients and Hong Kongers for 26 years of immense love and support," the paper said in an online article.

"Here we say good-bye, take care of yourselves."

Some staff expressed anger and frustration at the shutdown.

"(After) today, there is no press freedom in Hong Kong ... I cannot see any future in Hong Kong," said Dickson Ng, 51, a designer at the paper.

"I feel very disappointed and angry today. I don't understand why our limited group, company, and the newspapers were forced to stop operating under such circumstances."

In anticipation of robust demand for its final print run, Apple Daily printed one million copies, or more than 10 times its usual print run.

The shutdown deals the most serious blow yet to Hong Kong's media freedoms and could potentially destroy the city's reputation as an open and free media hub after Beijing imposed the security law on the global financial centre last year, media advocacy groups say.

Critics of the law say it is being used to crush dissent in the former British colony, an assertion authorities in Beijing and Hong Kong reject.

Officials in Hong Kong and China have repeatedly said media freedoms are respected but are not absolute.

Taiwan's China policy-making Mainland Affairs Council issued a statement on Apple Daily's closure saying it felt "extreme regret and solemnly condemned" that Hong Kong media has been unable to operate because of "political oppression" brought about by the national security law.

The Chinese foreign ministry said rights and freedoms could not jeopardise national security.

"I want to emphasise, Hong Kong is a society that has rule of law. Everyone is equal in front of the law, no one or no organisation is above the law," a spokesperson for the ministry said. "All rights and freedom, including media freedom, cannot go beyond the bottom line of national security."

In Canada, Foreign Minister Marc Garneau said the forced closure of Apple Daily was a significant blow to freedom of press and speech in Hong Kong. 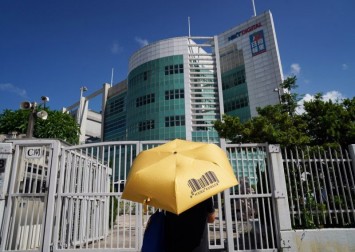 Five executives were arrested and two - chief editor Ryan Law, 47, and Cheung Kim Hung, 59 - were charged with conspiracy to commit collusion with a foreign country and denied bail. On Wednesday, a 55-year-old columnist for the paper was also arrested under the national security law.

Authorities froze the assets of companies related to Apple Daily, which senior executives said left it unable to operate.

Lai has emerged as one of the highest-profile targets of the new law and is facing three national security charges, including colluding with a foreign country.

He has been in detention since December, denied bail under the security law and already serving several sentences for taking part in unauthorised rallies, including during the global financial hub's mass pro-democracy protests in 2019.