Flight attendant whose boyfriend proposed to her not fired: China Eastern Airlines

China Eastern Airlines has clarified that it had not fired a flight attendant whose boyfriend proposed to her on a flight.

In a statement to AsiaOne, a spokesperson for the airline said the flight stewardess is currently still in its employ and "carrying out her duties as per normal".

"We wish to thank the public for their concern and the flight attendant has expressed appreciation for all well wishes from the public."

A China Eastern Airlines flight attendant probably never thought her boyfriend's sweet proposal would end up costing her a job.

You may have seen the viral video circulating on social media back in May.

In a clip shared by Pear Video, a male passenger on a flight from Xi An to Yinchuan is shown getting up from one knee after successfully proposing to his girlfriend, who happens to be a stewardess on the flight.

The teary-eyed lass then spoke through the inflight announcement system: "I really didn't know my boyfriend will be proposing to me on this flight, thanks for being my witnesses."

A voiceover in the clip - believed to be a passenger on the flight - added that everyone on board was touched by the romantic gesture, which took place about half an hour after take-off. Some passengers were also seen whipping out their phones to record the special moment.

Unfortunately for the couple, the airline was far less impressed.

According to a Liaoning TV report on Sept 10, the company fired the flight attendant on grounds that she had neglected passenger safety.

The company stated that the mid-flight proposal had caused a disturbance and was an irresponsible act which jeopardised the security of passengers. 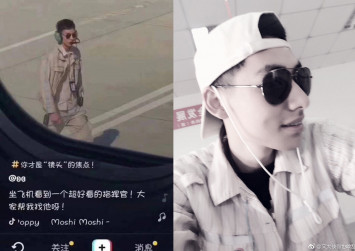 Chinese netizens on social media were divided on the issue, with some objecting to the airline's overly-strict and "heartless" move. Even more so as the flight attendant herself was unaware of her boyfriend's plans.

However, others felt that dealing with one's private affairs during working hours, especially for a job which involves public safety, is in itself a dereliction of duty.

So, if you're planning a romantic proposal for your flight attendant sweetheart, you now know what not to do.