Wang Jian, the former head of the HNA conglomerate, was declared dead by French emergency services after falling off a wall on July 3 last year.

French investigators on Thursday denied a report that a Chinese billionaire who fell to his death in the south of France last year committed suicide or was killed, seeking to end speculation about the case.

The death of tycoon Wang Jian, the HNA chairman who plunged from a high wall during a holiday in France, was ruled an accident by French judicial authorities after a criminal investigation by police.

Exiled Chinese tycoon Guo Wengui, who has donated US$100 million (S$135 million) to investigate alleged crimes by Beijing authorities, sparked fresh rumours last November when he claimed Wang might have been killed because "he knew too much".

On Thursday, the French newspaper Liberation published a front-page investigation into the death which ruled out foul play, but claimed that Wang had committed suicide, possibly because of business worries or pressure from Chinese authorities.

Hubert Meriaux, the police officer who led the investigation in the picturesque village of Bonnieux, said that there was "no indication to conclude that it was a suicide".

Wang, the head of the sprawling and heavily indebted HNA conglomerate, was declared dead by French emergency services after falling off a wall on July 3 last year. 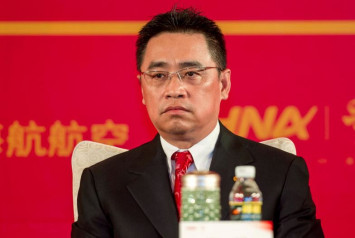 Top local prosecutor Philippe Guemas stressed that "he climbed onto the wall himself" and that that no witness had mentioned a suicide, including the man who was quoted in the Liberation article as saying he thought Wang had killed himself.

"It was never a question of a suicide," Guemas said.

The four-page Liberation investigation reached the conclusion that Wang had killed himself largely based on comments from a local road maintenance worker named as "Jacky".

The man "all of a sudden started to run ... as he came to the wall, he leaned on it and then stood up. He let three or four seconds pass and then jumped," Jacky told the paper.

The French police investigation concluded that "he climbed the small wall to have a photo taken of himself", but then fell under his own momentum into a 10-metre (32-foot) void on the other side of the wall.

HNA said Wang had been visiting Bonnieux during a business trip to France.

The company started as a small provincial airline servicing China's Hainan Province but expanded quickly in recent years under the leadership of Wang and business partner Chen Feng.

The firm's US$230 billion in assets were built up during a foreign buying spree that saw it diversify into tourism and finance via major deals to buy shares in companies including the Hilton hotels group and Deutsche Bank.

It also took stakes in foreign airlines such as Virgin Australia, France's Aigle Azur and TAP in Portugal.

But HNA came under pressure last year as Beijing cracked down on the risky debt-fuelled financing that enabled its expansion.

The conglomerate started selling parts of its empire to pay down its loans, including its Hilton and Deutsche Bank shares, and Wang's death was seen as likely to complicate the unwinding process.

Wang owned about 15 per cent of the Chinese group, making him one of the group's biggest shareholders.