Girl in China does 1,000 squats to compete with friend, ends up in ICU 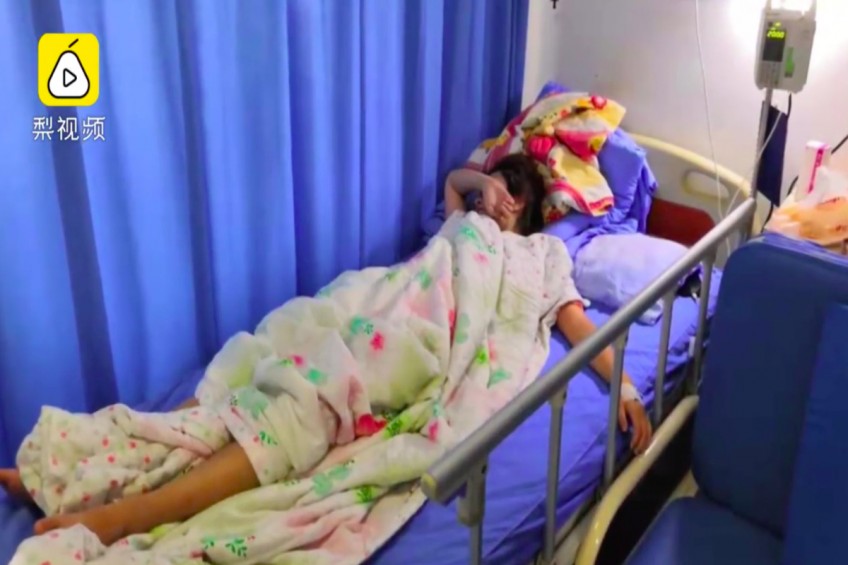 Competitions can be all fun and games, until it goes a little too far and someone gets injured.

A 19-year-old girl from Chongqing, China, identified as Tang, decided to challenge her friend to compare whose stamina was better through a squatting 'match'.

Both of them took turns doing one squat at a time and the challenge was done via video call, ensuring that neither girl could cheat.

As reported by China Press, she said: "We both did not want to lose and so we kept trying to beat each other, resulting in us completing 1,000 squats."

The girls ended up squatting about 1,000 times within a span of two to three hours. Following the intense competition, Tang reported that she felt slightly sore but assumed that such a reaction was normal after exercise.

Two days after the incident however, Tang discovered that not only was she unable to bend her legs but her urine was also alarmingly brown.

Tang's boyfriend accompanied her to the hospital, where she was informed that she may be suffering from rhabdomyolysis.

Rhabdomyolysis is a serious condition that arises from direct or indirect muscle injury. It results from the death of muscle fibres and the release of their contents into the bloodstream. In extreme cases, rhabdomyolysis can even lead to kidney failure and death.

For Tang, completing the large number of squats in the short span of time resulted in her condition.

After the diagnosis, she was quickly rushed to a larger hospital for emergency treatment and recovered in the EICU (Electronic Intensive Care Unit).

According to the deputy director of the endocrinology and nephrology department, Tang is lucky that she's a young person. If she were older, she could have suffered from kidney failure.

A phone call to her friend revealed that she was also hospitalised for the same reason, reported China Press.

Seems like having a competitive spirit may not always be a good thing.

Unbeknownst to the girls, the 1,000 squats challenge is actually a thing on the online sphere.

Just type '1,000 squats a day' on YouTube and you will get a whole slew of videos by fitness instructors and popular online fitness entrepreneurs like Cassey Ho.

Comments on the comments section of her video, which has garnered over 2 million views, reveal how strenuous the activity is, with one user stating "I managed to do 1,000! I cannot stand up BUT I DID IT".

Ho herself cautioned: "Please be careful. I want you to push yourself but not to the point where you hurt yourself".

However, none of the viewers have commented on experiencing rhabdomyolysis.

Moral of the story? To prevent rhabdomyolysis, it is important to gradually increase the amount of reps of exercise you are doing and the intensity of your training. Water and drinks with electrolytes and vitamins also aid in the recovery of your muscles after exercise.

After all, no matter how much you wish to have Kim Kardashian's posterior, getting kidney failure is not worth the beauty of an ample behind.