Guests erupted in cheers as a pair of newlyweds in China took to the stage before family and friends at their wedding banquet.

But instead of a video montage showing the couple's journey of love, the projector played a steamy bedroom scene featuring the bride… and the groom's brother-in-law.

With the affair out for all to see, the disgraced woman threw her hand bouquet at her husband as the enraged man yelled: "Did you think I didn't know about this?"

The unexpected expose had wedding guests gasping in shock.

It appeared that the groom did not stop at humiliating his bride in front of her family and friends, for the footage of the incident soon made its way to Weibo on Dec 26.

The clip was reported to have sparked a barrage of comments on the Chinese social media site, but the original post, as well as the hashtag #Brideexposedatwedding appear to have been wiped from the platform.

According to a series of messages purportedly written by the groom, he unintentionally caught his wife cheating on him while testing out a surveillance camera he had installed in their marital home.

After the video went viral online, some netizens came out of the woodwork to shed more light on the couple.

The bride was said to have suffered domestic violence at the hands of the groom, and sought comfort in his sister's husband. Over time, it evolved into an illicit relationship. 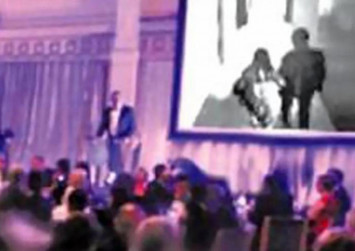 Some netizens, however, said the entire fiasco was staged. They pointed out that the clip that was screened at the wedding had the watermark of a video platform on it, and thus they speculated that the expose was a marketing gimmick.

Others commented on how the groom had infringed on the bride's privacy, and added that he might get into trouble himself for broadcasting explicit material in public spaces.

And though the woman's family threatened to call the police if he didn't remove the video from the Internet, it seems unlikely that she'd be able to repair her damaged reputation.

While most people concentrated on the couple's ugly fight, a few sharp-eyed netizens turned their attention to #Brotherinlawgate on Weibo.

There's a Chinese saying that goes, "You can't take advantage of your brother's wife," well, guess who didn't get the memo?

#Adultery/Affairs #Weddings and engagements #In Case You Missed It