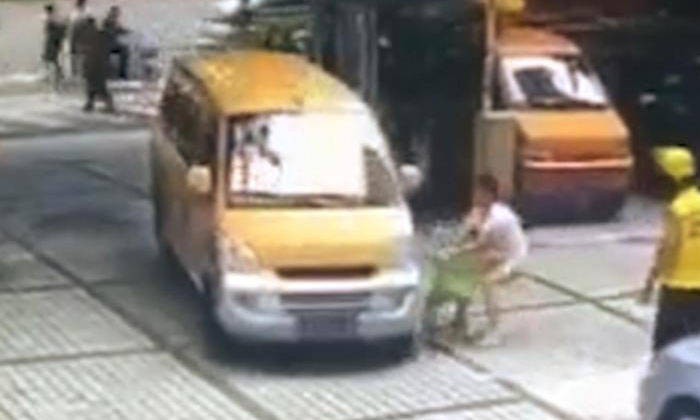 A woman in Guangzhou, China, was caught on surveillance footage pushing a small boy towards an oncoming van, and when that failed, she threw herself underneath the vehicle.

According to online reports, the woman allegedly did this in order to claim compensation for the "accident".

In the surveillance footage, the woman is seen attempting to push her son towards the oncoming van but failed as the vehicle managed to stop in time.

The small boy is seen taking a few steps back after his mum's failed attempt to get him into an accident.

A witness standing nearby is also seen holding the boy by his wrist.

Undeterred by her epic fail, the woman proceeded to throw herself onto the ground in front of the van, even going as far as to squirm to make herself seem as if she was trapped beneath it.

The police in China said that they are aware of and are investigating the suspected crash-for-cash scam incident, also known as "peng ci" which literally translates to "touching porcelain" in Mandarin.