Half of Shanghai achieves 'zero Covid'; city presses on with 'unsustainable' fight

A resident and a child look out through gaps in the barriers at a closed residential area during lockdown, amid the coronavirus disease (Covid-19) pandemic, in Shanghai, China, on May 10, 2022.

SHANGHAI/BEIJING, - Shanghai officials said on Wednesday (May 11) half the city had achieved "zero Covid" status, but uncompromising restrictions had to remain in place under a national policy which the head of the World Health Organisation (WHO) described as "unsustainable."

Data released by Shanghai, in its sixth week of a painful lockdown, showed the city recorded no cases outside areas under the strictest curbs on Tuesday for the first time since May 1.

Half of the city's 16 districts had achieved zero Covid status having not recorded any such cases for three days.

Despite achieving that important milestone, officials said it was not time to ease curbs.

"We must clearly recognise that the current situation is not stable and the risk of a rebound still remains," Zhao Dandan, deputy director of Shanghai's health commission, told an online press conference.

China's "zero Covid" approach has meant hundreds of millions across dozens of cities face various degrees of restrictions on movement, most dramatically in Shanghai.

Beijing said on Wednesday it detected 37 new infections on May 10, the lowest since April 26. Shanghai's cases were down to their lowest since March 23 at 1,487.

The ruthlessly-enforced isolation has caused significant economic damage in China and beyond and taken a huge psychological toll on many, fuelling rare outpourings of anger at the authorities.

In Beijing, where authorities were trying to avoid Shanghai's fate, many businesses have been closed and large numbers of people were told to work from home in an effort to end an outbreak of dozens of daily cases.

In rare public comments on a government's handling of the pandemic, WHO Director-General Tedros Adhanom Ghebreyesus said on Tuesday China's zero-tolerance Covid-19 policy is not sustainable given what is now known of the virus. read more

He said better tools to fight Covid suggested it was time for a change in approach. China, which has kept its borders all but shut to international travel for two years, is a global outlier as much of the world tries to live with the virus.

A United Nations Weibo post of Tedros' comments was removed from the Twitter-like platform on Wednesday shortly after being posted. The United Nations and Weibo did not immediately respond to requests for comment.

China's leaders doubled down last week on their goals to eradicate outbreaks of virus, and threatened action against critics of the policy, which authorities say "puts life first."

China has pointed to the millions of deaths caused by the virus in other countries. Its official toll since the virus first emerged in the city of Wuhan in late 2019 is just over 5,000, far below the nearly one million deaths in the US.

New modelling by scientists in China and the United States sees the risk of just over 1.5 million Covid deaths if China ditches its zero-Covid policy without any safeguards such as ramping up vaccination and access to treatments.

Only half of China's over-80s are vaccinated.

Speaking after Tedros, WHO emergencies director Mike Ryan said the policy's impact on human rights also needs to be taken into consideration. 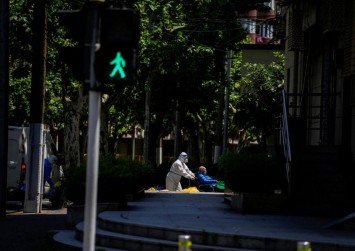 In Shanghai, residents unable to leave their homes have complained over lost income, difficulties sourcing food, and being unable to get emergency healthcare for life-threatening conditions before obtaining a negative Covid test result.

Entire communities have been sent to quarantine centres, which often lack showers and other basic facilities, sometimes over just one neighbour testing positive.

The lockdown was tightening, with the city making what it hoped would be a final push to eradicate infections before easing restrictions, potentially by the end of the month.

An increasing number of Shanghai residents in previously less strictly sealed areas of the city, have in recent days seen new fences erected around their housing compounds and have received notices that they would not be allowed outside anymore.

Shanghai's lockdown has tested the ability of manufacturers to operate amid hard restrictions on the movement of people and materials.

The latest sign of the struggle came at Tesla's Shanghai plant, which operated well below capacity this week due to problems securing parts.

But the impact on supplies of critical goods was more far-reaching. Some of the largest US hospitals said on Tuesday they were facing critical shortages of products used in CT scans, x-rays and radiography as a result of reduced production capacity in Shanghai.

General Electric's healthcare unit said on Tuesday it had increased output of chemicals used for medical scans and tests at its factory in Ireland to compensate for its Shanghai factory not operating at full capacity.

ALSO READ: Learning from Shanghai: What not to do in an Omicron crisis