HONG KONG - A Hong Kong democracy activist who threw a fish sandwich at the city's then leader to protest rising inequality had his assault conviction quashed by a court on Wednesday.

Avery Ng, chairman of the League of Social Democrats political party, lobbed a tuna sandwich at then chief executive Leung Chun-ying during local elections in 2016.

The projectile missed its intended target after Mr Leung ducked, hitting a police officer instead.

Mr Ng, 42, was subsequently convicted of common assault in 2017 and sentenced to three weeks in jail. 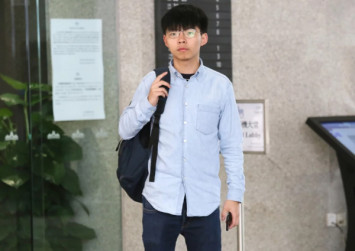 But on Wednesday his conviction was overturned by the High Court.

Mr Ng did not serve any time in prison as he was granted bail for his appeal.

"The prosecution failed to prove beyond reasonable doubt that the appellant had committed a common assault," Justice Joseph Yau said in his judgment.

At his trial Mr Ng said the "smelly fish" sandwich was a protest prop to show that the poor in Hong Kong are not able to afford even a simple breakfast.

At the time the city's pro-democracy parties were demanding a universal retirement protection plan.

Mr Ng greeted reporters with a victory sign after the ruling and said the prosecution had been politically motivated.

Mr Leung, in office from 2012 until 2017, was accused by opponents of overseeing the erosion of Hong Kong's freedoms and doing little to counter deepening inequality in the heavily populated financial hub.