HONG KONG - Hong Kong on Wednesday (March 13) barred Boeing 737 Max airliners from its airspace, the latest in a series of government bans worldwide in the wake of a deadly plane crash in Ethiopia.

Despite Boeing's assurances in the wake of the disaster, the European Union, Britain and India joined China and other countries grounding the plane or banning it from their airspace as they await the results of the crash investigation.

The semi-autonomous Chinese city's Civil Aviation Department (CAD) said it was imposing a temporary suspension from 6pm local time on Wednesday until further notice on "operation of Boeing B737 Max aircraft into, out of and over Hong Kong".

The ban is "solely a precautionary measure to ensure aviation safety and protect the public", a CAD spokesman added. 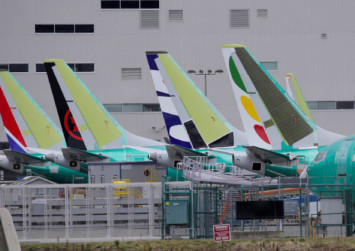 The department added it had been in close contact in the past few days with the US Federal Aviation Administration and relevant organisations, including two airlines - India's SpiceJet and Globus Airlines of Russia - that have recently used the 737 Max for flights to Hong Kong.

SpiceJet had defended the jet on Tuesday, describing it as a "highly sophisticated aircraft".

Hong Kong flag carrier Cathay Pacific does not have any 737 Max aircraft in its fleet.

On Sunday, a new Ethiopian Airlines 737 Max 8 went down minutes into a flight to Nairobi, killing all 157 people on board.

The crash came after a Lion Air jet of the same model went down in Indonesia in October, claiming 189 lives.

Several airlines have grounded the Max 8s in their fleets, but many others are continuing to fly the plane pending an investigation into the crash and possible guidance from Boeing itself.