Steven Ho tested positive on July 2 and has self isolated.

HONG KONG — A Hong Kong lawmaker who met President Xi Jinping during a rare visit by the Chinese leader to the territory last week said he tested positive for Covid-19 two days after the meeting.

Mr Steven Ho, who is part of the city's largest pro-Beijing party, the Democratic Alliance for the Betterment and Progress of Hong Kong, tested positive on Saturday (July 2) and has self isolated, according to an announcement on his Facebook page on Sunday.

Mr Ho said he tested negative for the virus on June 30, the day he was shown in a photo with Mr Xi, displayed by local broadcaster RTHK.

Mr Xi was in Hong Kong to mark the 25th handover celebration of the territory to the mainland from Britain and swear in the city's new leader John Lee. It was his first public trip outside the Chinese mainland since the Covid-19 pandemic began.

Ahead of Mr Xi's visit to Hong Kong, officials ramped up Covid-19 testing and quarantine protocols, along with a massive security force blocking roads and the airspace around the picturesque Victoria Harbour.

China adheres to a zero-Covid policy that aims to eradicate all outbreaks, at just about any cost, running counter to a global trend of trying to co-exist with the virus. 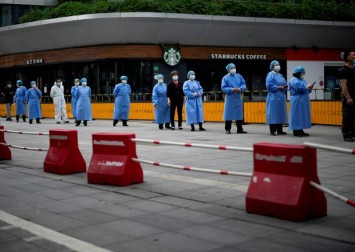 Mr Xi's visit to Hong Kong was his first since 2017, when he swore in outgoing leader Carrie Lam and stayed in the city for the duration of his trip.

During last week's visit, he came to Hong Kong on Thursday and Friday but stayed overnight in neighbouring Shenzhen.

The whereabouts this time, and the reasons why he may have chosen Shenzhen, have not been officially confirmed.