Police stand guard at Causeway Bay after authorities denied permission for a protest rally during the 24th anniversary of the former British colony’s return to Chinese rule, on the 100th founding anniversary of the Communist Party of China, in Hong Kong, China, on July 1, 2021.

HONG KONG, July 6 - Hong Kong police said on Tuesday (July 6) they had arrested nine people, including six secondary students, on suspicion of terrorist activities, the latest to be targeted under a sweeping national security law Beijing imposed on the financial hub last year.

Police said at a press briefing those arrested were aged 15-39 and also included a university management-level employee, a secondary school teacher and an unemployed person.

Officers also froze bank funds of around HK$600,000 (S$104,000), as well as cash that they believed was linked to suspected terrorist activities.

They also seized triacetone triperoxide (TATP) in a hostel room police described as a laboratory for bomb-making equipment to deploy at a cross-harbour tunnel, railways, court rooms and rubbish bins.

TATP has been used in attacks by extremists in Israel and London.

Police said the group, called Returning Valiant, had been renting the room at the hostel in the bustling shopping district of Tsim Sha Tsui for about a month.

"They had a good division of labour among those arrested. Some of them provided money. Some are the scientists - the ones who made the TATP in the room," Senior Superintendent Steve Li told reporters.

"One is responsible for the sourcing of chemicals and other materials needed for the plan, while another small group of people create the bombs, using chemical equipment. There is also a surveying team and an action team, which is responsible for laying the bombs." 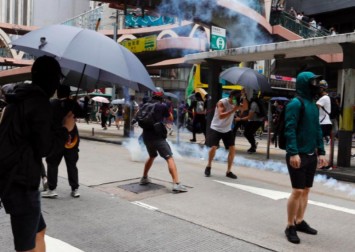 Members of the group had deliberately recruited secondary students who planned to leave Hong Kong for good, Li said.

Beijing imposed the security law on Hong Kong last year, punishing what it regards as subversion, secession, terrorism and collusion with foreign forces with up to life in jail. Authorities have repeatedly said it has "restored stability."

Critics of the law, including Western governments, lawyers and international human rights groups, say authorities are using it to crush dissent in the former British colony, an assertion Beijing rejects.

The Hong Kong government has said that freedoms in the global financial hub are respected but not absolute and they cannot endanger the security law.